Look In My PC is a free auditing program for all supported versions of Microsoft Windows that may generate dozens of reports when run.

Technicians and system administrators who are troubleshooting PC issues or errors, often need to use tools that provide them with additional information about the computer system's hardware and software.

We have reviewed many programs in the past that fall into that category: Speccy, PC Wizard or Driver View in the hardware category and Hijack This, Autoruns or Process Monitor in the software category.

Look In My PC

Look In My PC offers a mix of both as it enables you to create custom reports using dozens of options covering both hardware and software. 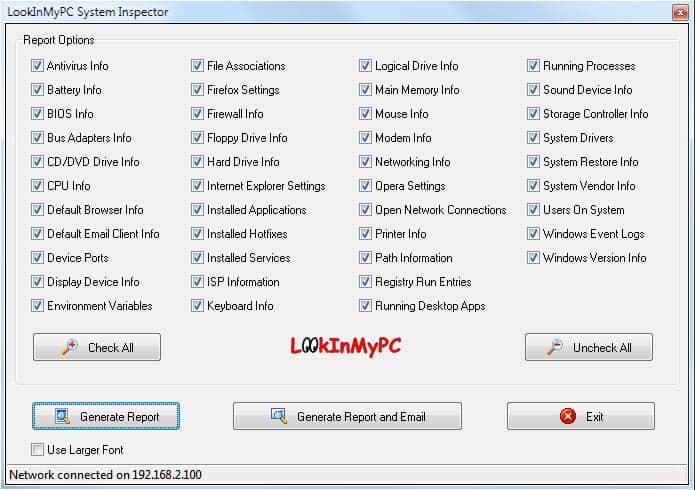 Look In My PC is offered as a portable program or installer on the developer website.

The computer program displays a list of report options upon start, with all of them selected by default.

They range from antivirus information, over cpu and bios information, to open network connections and listing all user accounts of the operating system.

As you can see on the screenshot above, it lists quite a few options. The latest version of the program lists some report options in orange. Those may be used in report comparisons; more about that later.

The report generation takes about a minute if all options are selected. The generated report is created as a local html file that is opened in Internet Explorer, even if another web browser is the default system browser.

The information provided by the report is extensive. It ranges from specific hardware information like the type of motherboard, or cpu manufacturer, to the motherboard model, bios version or system memory and capacity. Only what you have selected when you ran the program is displayed in the report though.

Software makes up most of the default report. The program lists default browser and email client information, open desktop applications, installed hotfixes, all installed programs with links to perform a Google search, installed services and information about them as well as the running processes and Registry run entries.

The report can also be generated and emailed which is handy if you are connected via a remote session, or if someone else wants to take a look at the report as well.

Look In My PC has still some quirks. The report looks out of line for instance.  The program did not detect the installed antivirus software on the test system and opened the report in Internet Explorer although it detected Firefox as the default system browser.

Look In My PC can be downloaded from the developer's website. It is compatible with all versions of Microsoft Windows from Windows 2000 to Windows 7.

The developer of the application has released version 2 of the program. It ships with additional features such as profiles that you can save, command line support or portable options.

The most recent version introduces report comparison. Basically, what it does is compare certain information of two reports to highlight differences. The orange items mentioned above? Those are compared between reports.

Among the things that get compared are environment variables, installed programs, services and hotfixes, firewall information, networking inforamtion, and Registry Run keys.

Look In My PC has not been updated in a while. The last compatible Windows version is listed as Windows 7 on the developer site. While it appears abandoned, it works just fine on newer versions of Windows.

We have tested the program under Windows 10 Pro, and it worked fine and without issues.

Martin Brinkmann is a journalist from Germany who founded Ghacks Technology News Back in 2005. He is passionate about all things tech and knows the Internet and computers like the back of his hand. You can follow Martin on Facebook or Twitter
View all posts by Martin Brinkmann →
Previous Post: « SSD Tweaker review
Next Post: Microsoft Visual Studio 2010 RC Download »