Remote Reboot X has been initially developed by Doug Zuckerman to remotely control the reboot process of multiple computer systems in an effort to automate the monthly maintenance schedule of more than a 100 servers as much as possible. Doug later added the option to manage Microsoft Windows software updates from the program interface of Remote Reboot X and plans to integrate several important new features to future versions of the software program.

The program works the following way: Users start by adding a list of IP addresses or computer names to the program. It is then possible to highlight some or all of them to perform actions on the selected hosts. Actions can be selected by either selecting them from the Actions menu or by right-clicking. 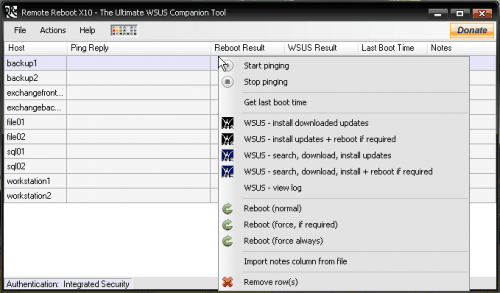 Along with RemoteRebootX.exe there are 3 additional .NET executables included in the zip file below. To use them you must have the WSUS Admin Console 3.0 installed on your computer. They will allow you to connect to your WSUS server and â€¦ Additional information and usage tips are available at the developer's website. Remote Reboot X has been developed in Microsoftâ€™s Visual C# 2008 and requires therefor the Microsoft .net Framework. Doug does not mention the .net Framework version on his website though.