Matt's System Helper Outer has been developed to make it a tad easier to issue all those console commands in Windows. The program is basically a graphical user interface for several of the most common commands that users issue on the command line. The portable software program uses a basic interface that seems a bit chaotic on the first run. tabs at the top divide the possible commands into logical units. The network tab for instance contains commands to release or renew the network address, flush or register DNS or run ipconfig, ping or traceroute commands.

The major benefit of this approach is that the user does not need to know the exact command. All that it takes to flush the DNS is to click on the flush button. A traceroute is started after entering the IP or domain name in the form. 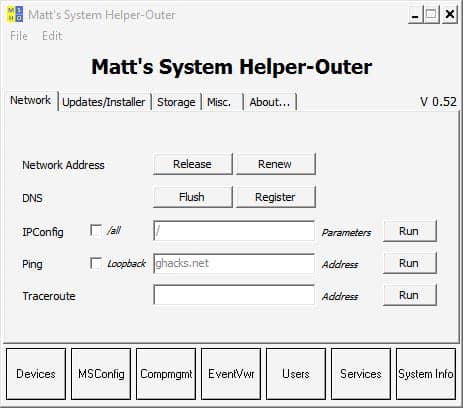 The updates/installer, storage and misc tabs at the top contain similar commands that make the life of a system administrator or user just a bit easier. Links to various important system tools like the device manager, event viewer or user control are displayed at the bottom of every screen in the program.

Some users might say that they can issue the commands faster using the command line. While that may be true the majority of users will likely find a tool like Matt's System Helper-Outer beneficial and time saving. The software can be downloaded from the developer's website. No information about the compatibility of the software are posted on the developer's homepage. It worked fine on a Windows XP SP3 test system.

Update: The program is unfortunately no longer available, and we have removed the link to the homepage because of this. It is probably best to use the command line instead as I'm not aware of a comparable program for recent versions of Windows.