The iReboot software handles the rest. This means that you do not have to pay attention to the boot process, great for a quick stroll to the kitchen or restroom. When you return, your computer should be waiting for you already at the log in screen of the operating system you have selected. 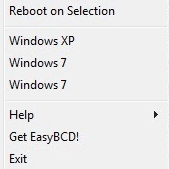 The program to reboot computers into different operating systems has a small memory footprint (roughly 2 Megabytes). It provides access to its features from the Windows system tray.

Update: To download the free for non-commercial version of the application select the option on the page linked above. The commercial version is available for $10 at the developer website as well. Note that the program has not been updated since 2009 which may be an indicator that it has been abandoned by the development company NeoSmart Technologies. It works fine under all recent versions of the Windows operating system though.

Martin Brinkmann is a journalist from Germany who founded Ghacks Technology News Back in 2005. He is passionate about all things tech and knows the Internet and computers like the back of his hand. You can follow Martin on Facebook or Twitter
View all posts by Martin Brinkmann →
Previous Post: « Fastest PDF File Viewer
Next Post: PodCast Downloader Robert's Podcatcher »