The Windows operating system comes with a voice recorder that is limited and can only save the recordin as wav format files. While that may work for some users, others may find it too limiting to work with.

That's why most Windows users who want to record voice on their system are looking for a voice recording software that offers better functionality.

MP3 Voice Recorder is such a software program. It is a digital voice recording software that can save the recorded voices to several output formats including MP3, WAV, AAC, WMA, FLAC, M4A and AC3.

The basic interface of the voice recorder displays the most relevant options right on screen with the option to dive into the settings to customize the output further. All that basically needs to be done is to check if the audio source is the correct one. Other options on screen are to change the output directory, file name and quality. 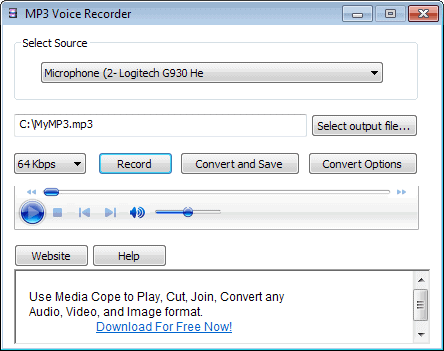 The voice recorder offers playback possibilities in its interface which can be used to play the recording. The main advantage of a software like MP3 voice recorder is its simplicity. It is practically possible to start recording right away. Users who are looking for advanced functionality might try audio editors like Audacity for the purpose.

The voice recording software displays a small survey during installation which does not have to be filled out by the user. The software can be downloaded from the developer's website.

Update: Please note that the program tries to install Relevant Knowledge software on the computer. Relevant Knowledge monitors Internet behavior and it is suggested to decline the installation during the setup. Thanks JoJo for pointing that out.

You may also get other offers during installation, make sure to decline those if they are displayed to you if you do not want to make use of them.

Update 2: You can also use the free audio recorder and editor Audacity to record your voice to mp3 format. While not as easy to use as Mp3 Voice Recorder, it offers a powerful editor to edit the recording right away, and does not ship with any adware offers.

The downside is that you will have to spend some time getting used to the program, even if you only want to use it to record your voice on your system.

Martin Brinkmann is a journalist from Germany who founded Ghacks Technology News Back in 2005. He is passionate about all things tech and knows the Internet and computers like the back of his hand. You can follow Martin on Facebook or Twitter
View all posts by Martin Brinkmann →
Previous Post: « Google Docs Batch Uploader
Next Post: Microsoft Security Patches September 2009 »