SFTP And SSH Server For Windows

Running a SFTP or SSH server in a Windows environment can be interesting for businesses and end users alike. The free SilverShield SSH / SFTP Server offers this server functionality mainly for end users as it allows only one concurrent connection to the server. The pro version which is sold by the company has no such limits. Both server versions are identical in every other aspect.

It does not take long before the SSH or SFTP server is up and running. All it takes is to start the server in the server management console and add at least one user account. User accounts require the usual set of information that include a username, home directory and a password. A public key can be added as well to provide public key authentication. The server administrator can define the user rights in the very same user creation dialog.

It is possible to enable command and shell access, sftp and forwarding separately from each other. The login requirements can also be configured. Users have basically three options to log into the server: password authentication, public key authentication or keyboard-interactive authentication. The server admin can make any or all of the selected methods a requirement. 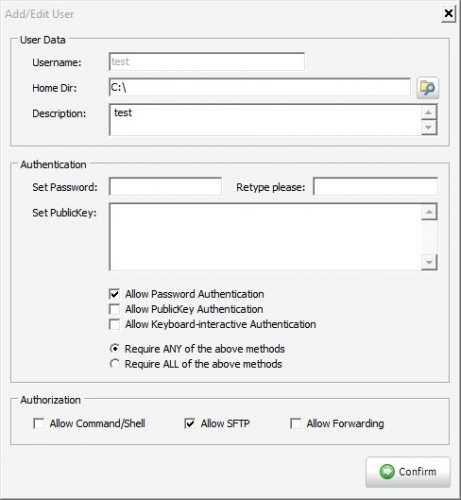 The server management console contains several settings that are of importance. Administrators define the server-key file location and log path in there, session timeouts, the server port, ssh and sftp security settings like forcing a delay on new connections or blocking IPs after a number of failed connection attempts. The management console itself can be password protected and configured to a specific port and IP. 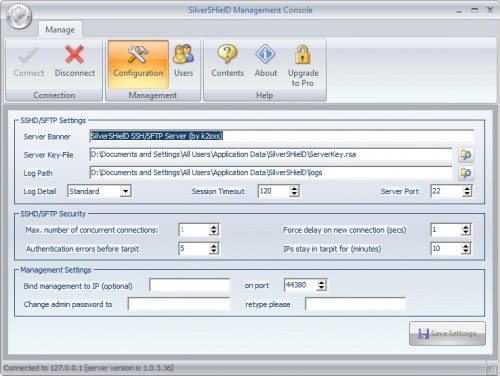 The free version of Silvershield SSH and SFTP Server should be just fine for smaller networks. Users who want more connections without having to pay for the SSH server can take a look at FreeSSHd A Free SSH Server For Windows or the Windows SSH Server WinSSHD.