The developers of the startup tweaker have now released an updated version of their software program. This version is - finally - compatible with all Adobe Photoshop versions from Adobe Photoshop 3 to Photoshop CS4. 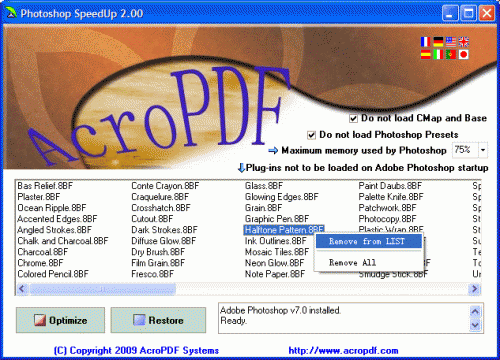 The program interface on the other hand remained the same. Adobe Photoshop Speedup will scan the computer system for installed Photoshop installations and display versions that it discovers at the bottom of the interface.

Adobe Photoshop SpeedUp significantly decreases the time it takes to load Adobe Photoshop by disabling the plug-ins that you may not need. There are several options such as whether to load the Adobe fonts, load the presets, and set the memory usage. You may restore to the original settings at any time.

The program offers four options to speed up and optimize Photoshop. It can limit the memory usage of the image editor, prevent that Adobe Presets, CMAP and Base are loaded and remove certain plugins from the list of available ones so that these are not loaded during startup.

Update: The program has not been updated for a while. It does not support the latest version of Adobe Photoshop (that is CS5) at the time of writing.