Windows Media Player and Winamp are two of the most popular media players on machines running Microsoft's Windows operating system.

Both come with a large feature set: they play many audio and video formats, and support all kinds of media management capabilities and are extensible.

Winamp by default comes with the option to import the iTunes media library. It does however not include a similar option to import media from Windows Media Player which is why the software program has been created by the developer.

The application can import the Windows Media Player library into Winamp. This includes audio and videos files, and all metadata including ratings and play counts. 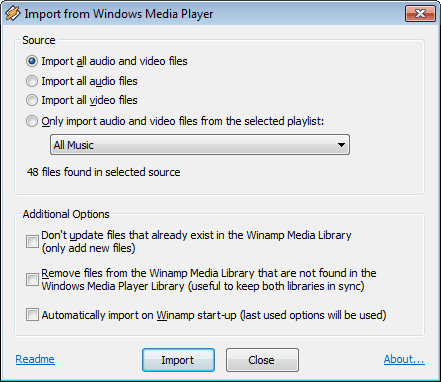 The software comes with a few options to customize the import of the Windows Media Player library. It is possible to import all media files, or only audio or video files. There is also an option to only import audio and video from an existing playlist.

The program will not make any changes to Windows Media Player no matter which settings are selected in the application.

Note: The application is still offered as a download on the Winamp forum. Note though that it has been updated in 2009 the last time, and that some features may not work properly anymore because of this. Winamp itself has not been updated in a while, and most Windows users have moved on to other media players.