How To Make uTorrent Portable

Using a portable version of uTorrent can be beneficial or even required in several situations. It is for example easier to put a portable version of the Bittorrent client on a removable device so that it can be used on different computer systems without having to worry about settings, paths and configuration files. Another reason could be to avoid leaving traces of uTorrent running on a computer system. The torrent client uTorrent will place several files in the application data folder in Windows after installation, and while a portable copy of the Bittorrent client won't prevent the generation of temporary files on the system, for instance recent documents, it makes sure that the core files of the application are not found on one of the main drives of the PC.

It is actually very easy to make uTorrent portable. All that is needed is an installation of uTorrent on the computer system. Now create a new file in the directory of the utorrent.exe and name it settings.dat. uTorrent will recognize the file and start using it instead of the settings file located in the application data folders. 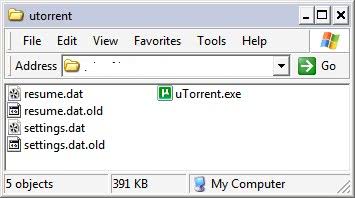 Please be aware that old settings are not carried over and that it is needed to configure the client again on first run. This may take a while depending on the level of customization, but is a one-time operation only. All torrents will be missing at the first start as well. You can easily add them again by selecting the correct locations for new and finished downloads in the client. The software will then automatically recognize the new torrents upon restart, perform checks and continue the downloads from the position they stopped the last time they were downloaded.

Running a portable version of uTorrent does make it easier to backup the Bittorrent client as well. All that is needed is to backup the files in this one directory (and in the unfinished downloads directory if those should be backed up as well).