Norton was renowned back in the days when I started using personal computers for resource hungry security applications that could slow down computer systems significantly. I decided to skip Norton products for my whole life like many other users at that time. There are still many tech savvy users who avoid Norton antivirus and other software programs from Norton because of how they performed ten or more years ago. Norton software programs have on the other hand received lots of praise from computer magazines and reviewers. That's the moment the idea for this review was born. I wanted to know if Norton antivirus and Norton 360 were as good as the press thought they were or if they were still the heavyweight security suites that would bog down a system noticeably.

I contacted Norton with my proposal and they were all for it. I quickly received a review copy of Norton 360 and started the test about a month ago. Norton 360 is Norton's top of the line product that combines all features of Norton Antivirus, Norton Internet Security and some additional ones exclusive to this version. Users who install Norton 360 get among other features an antivirus solution that protects against all forms of malware (including bots, rootkits, viruses, trojans and spyware), a software firewall, email protection, web browser protection, identity protection, a file backup solution, secure networking and PC tuneup modules.

This can look like overload to some users but the first surprise awaits during the installation of Norton 360. The installation is quick and painless. A system restart is required after installation of Norton 360 which was not noticeably slower than before. One point of criticism that has haunted Norton products for years seems to have been taken good care of by the Norton developers. Both the system start and the system itself do not feel noticeably slower than before (startup and shutdown time is probably in the region of 1-2 additional seconds at the most). That's great and somewhat unexpected considering the past.

Norton 360 itself runs pretty much automated. It is a good idea to tweak the settings at least once. This includes disabling modules that are not needed (e.g. if you run a firewall you might not want to run another one, same for the backup solution or web browser protection). The purpose of an all-in-one solution like Norton 360 on the other hand is to be the one program that is needed to secure the PC. Users who only need specific modules might want to consider the two other Norton products Norton Antivirus or Norton Internet Security instead. 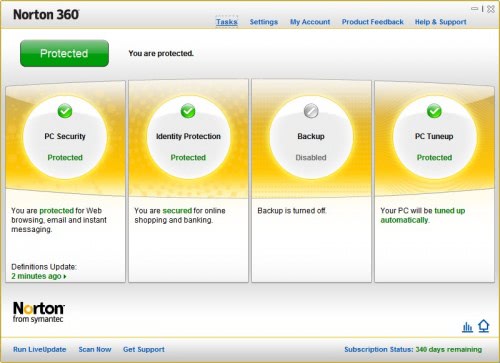 The interface of Norton 360 on the other hand could confuse some users as it opens several modules and options in new windows. It's not that seldom that two or even three Norton 360 windows are open at the same time. Uses who are looking for advanced options need to go into the settings of the security software program. 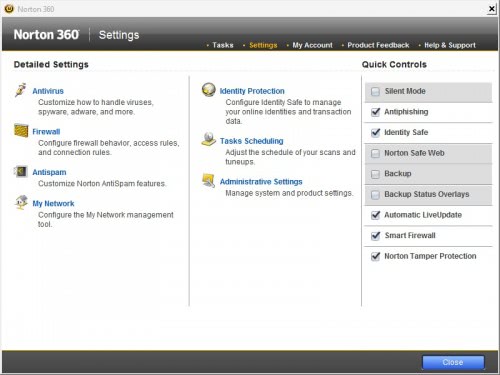 A click on any of the modules in the Settings of Norton 360 will open display advanced configuration options. No direct help or explanation is offered there which can be problematic if the name of the setting does not explain what they do (anyone want to guess what Early Load or Sonar Advanced Protection in Automatic Protection under Antivirus do?). A click on the question mark will open a Windows help file that explains the settings in detail. It would be more comfortable if at least some explanation was given directly in the menu (for example by hovering over a name).

These settings on the other hand are very detailed. It is possible to enable some modules that are not enabled by default (for example Microsoft Office Automatic Scan, Advanced Events Monitoring or enabling Silent Mode). Advanced users should take their time and take a detailed look at the settings provided. 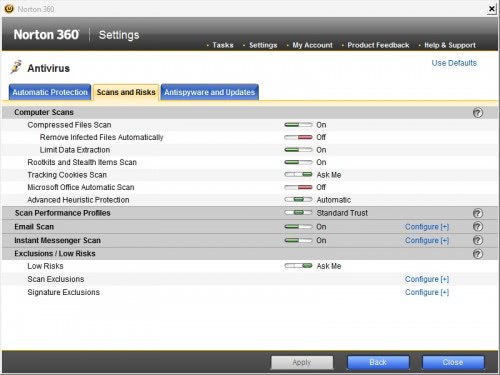 Norton 360 is a security software program that is ideal for users who want an all-in-one protection that requires barely any configuration. It might on the other hand also be an interesting alternative for uses who like to configure their security software programs as much as possible which is something that Norton 360 offers as well. The best part (if you ask me) is the confirmation that Norton security programs are not slowing down computer systems noticeably anymore.