Control Pad Turns The Numeric Keypad Into A Command Launcher

Control Pad is a portable software program (that alternatively can be installed as well) for the Windows operating system that turns the numeric keypad into a command launcher. The software basically works by assigning actions like opening programs, websites or files to key combinations which can then be executed by pressing and holding the * key on the numeric keypad (laptop users can enable laptop mode to have the same effect when pressing F12). This will open a command bar that can be used to enter the key combinations that have been defined previously.

Everything that can be launched from the Windows Run dialog can also be launched with Control Pad. 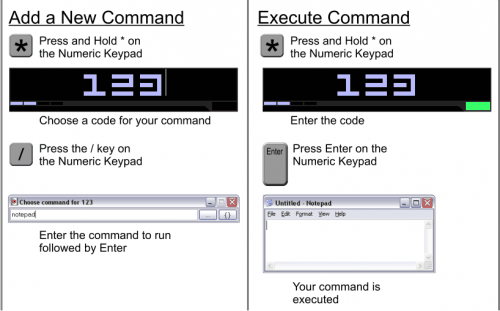 Commands can also be directly edited in the commands.ini file which is usually faster if multiple commands are added. Special commands can also be assigned to key combinations. This is best done by clicking on the bracket icon after pressing / in the key creation process. Here it is possible to control media, change the volume of the sound, add browser functions like going back and forward and configuring keyboard shortcuts. The program can also initiate mouse clicks which might be interesting for some purposes.

It is even possible to combine commands with the + parameter. A user could for example launch multiple programs or websites with a single command.

Options are available to change the time it takes to display and auto close the command interface. Several aspects of the interface can be modified including colors, fonts, dimensions and opacity.

Laptop mode switches moves the keys from the numeric keypad to the F10-F12 keys. F12 will launch the input box, F11 will close it and F10 will add a new command after entering the code in the input box.

Control Pad is a versatile command launcher that can be handled with one hand. That and the fact that is uses only one Megabyte of computer memory (and about five of virtual memory) is its greatest strength.