You can simply press the Print screen on the computer keyboard if you want to create a screen shot of the current computer screen. The screenshot will be stored in the windows clipboard and it only takes an image editor or other program accepting images from the clipboard to create or work with the screenshot. It becomes slightly more complicated if a screenshot is needed of a part of the computer screen. It is still doable with the print screen and an image editor but it does require more work to create the end result.

Windows screen shot software programs like Screenie make it easier to create screenshots of parts of the computer screen. We already reviewed quite a few in the past including our favorite screen shots taking software MWSnap but also screen capturing tools like Greenshot, Screenshot Captor or Jing. 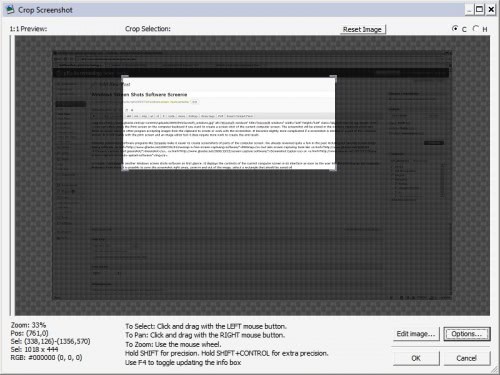 Screenie is another Windows screen shots software on first glance. It displays the contents of the current computer screen in its interface as soon as the user hits the Print key on the computer keyboard. From there it is possible to save the screenshot right away, zoom in and out of the image, select a rectangle that should be saved or edit it further in the default image editor.

The screen shot can be stored locally, added to the Windows Clipboard, uploaded to a ftp server or to Imageshack. It is possible to save them right away without seeing the interface of the application at all. Screenshots can also be saved to multiple locations simultaneously which might be interesting for users who want to keep a local copy but need to upload it to an ftp server or Imageshack.

Probably more unique than the export feature is support for dual and multi-monitor systems. We were not able to test this feature on the test system as no second computer monitor was connected at the time of the tests. The Windows screen shots software does come with a timer which works similar than a timer on a digital camera. It will create a screenshot after a specified amount of seconds have past.

Screenie is an interesting screen shot taking software. It is a bit high on the used computer memory while running and could use a few more screenshots that would make it possible to select part of the screen for the screen short immediately.

Update: Screenie is no longer available. We have removed the link from the article and suggest you make use of the alternatives listed in this article.