It is not really clear why the protection has been implemented in first place, but most likely to avoid situations where users install themes that corrupt operating system files or change the default theme in a way that it is difficult or even impossible to work with the operating system. Imagine malware changing the font color to dark on a dark background for instance.

The problem that users who want to change the look and feel of the operating system face is that there are only a handful of official themes available that can be installed.

Windows 7 and newer versions of Windows change that a bit by supporting basic custom theme creation options. These are limited to desktop wallpapers and the color scheme mostly though and can't be compared to switching to full themes which can modify pretty much any aspect of the operating system

Update: We suggest you use UxStyle Patcher to patch Windows 8.1 or older so that you may install themes on the system. The program supports all versions of Windows 8.1 or older, and changes system files in memory.  This means that they are not changed on disk.

If you run Windows 10, you may want to use Ultra UX Theme Patcher instead. The program supports Windows 10 and patches the files directly. It does create backups of the files so that you can restore the status quo if needed.

The program reviewed below (Universal Theme Patcher) only works on Windows 7 or older versions of Windows. 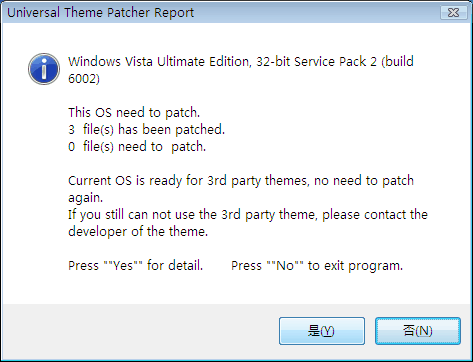 The only way to enable third party theme support in the Windows operating system is to patch system files. The number of files depends largely on the operating system. Windows XP users for example only need to patch one file while Windows Vista and Windows 7 users need to patch three files to be able to add custom Windows themes. 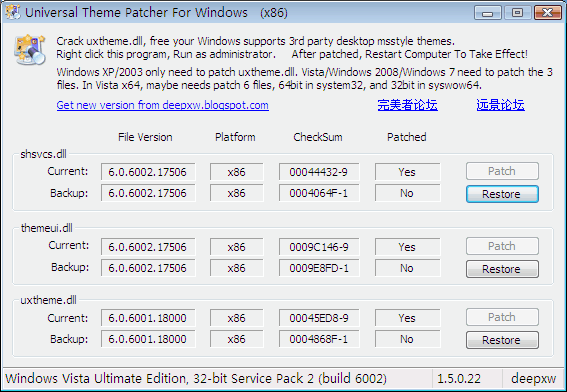 The Windows theme patcher will display information if files need to be patched on the computer system after selecting the interface language.

A click on Yes leads to a detailed listing that displays the system files that lock the custom theme selection in Windows. Information includes the file version, platform, checksum and if the file is patched. Each system file can be patched and restored individually using that menu.

The program will automatically create a backup before patching the system files. Windows Vista and Windows 7 users need to run the application as administrators to patch or restore system files, as the operation fails otherwise.

The computer system needs to be restarted for the changes to take effect. It is possible to patch silently by using the -silent argument.