We reviewed Open XML Viewer for the first time back in November 2008 when it was released as a technical preview. The preview version was only available for Firefox on Windows and Linux operating systems, and limited in functionality.

The program enables you to display Office 2007 docx documents as HTML documents in the browser. The conversion did ignore several objects and elements in the technical preview. While it worked fine most of the time for basic documents, it had issues when you tried to display complex documents using it.

Open XML Viewer has now been released as version 1.0 which comes with an increased functionality and compatibility. The developers have added support for Internet Explorer as well as Opera (on both Linux and Windows), and are making the tool available as command line versions as well. 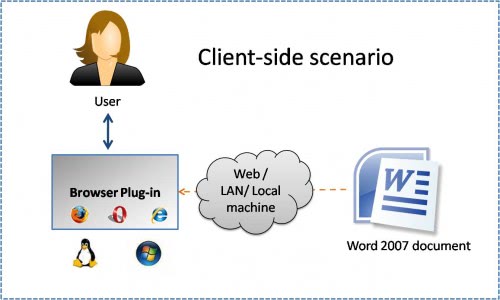 Downloads are available for all supported web browsers at the Codeplex website where the project is hosted. Take a look at our ways to open docx documents overview if you are looking for a more traditional way of opening docx documents.

Open XML Viewer was a handy solution back when Microsoft introduced the new Office document formats in Office 2007. It was one of the few options that users had back then to read these new formats outside of Office.

The situation has changed, and the fact that the browser add-ons and command line program has not been updated since 2009 does not help.

Update: It needs to be noted that the last update dates back to 2009, and that new browsers and versions of previously supported browsers may not be compatible with the program anymore.

Several new solutions are available however to view Microsoft Office XML files. You can for instance use Google Drive or Microsoft's OneDrive for that, provided that you have an account to sign in to. Both display Office XML documents, not only docx but also xlsx for instance.

The Open Source programs Open Office and Libre Office support the new document formats as well which means that you can install them locally to read and edit the formats similarly to how you would do it in Microsoft Office.

Since OpenXML Viewer has not been updated since 2009, it is not really suggested to use it anymore as there are better solutions available for that.