Anti-KeyLogger Tester is a free program for devices that run Microsoft's Windows operating system to test the PC's anti-keylogging protection.

Key Loggers are one of the most dangerous threats that computer users face these days. A key logger can be hardware or software based which may make detection difficult on a system.

Keyloggers are designed to record key strokes made on the computer keyboard, and sophisticated ones add other forms of recording to the process. Some may take screenshots in regular intervals for example.

A keylogger does not differentiate between good and bad keys, which means that it will record every single key stroke a user makes on the system. This does include information the attackers are after such as passwords, credit card information or business information, but also private emails, forum posts or homework for school. 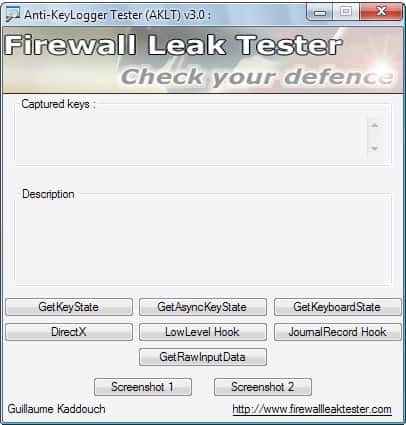 Most security programs detect and prevent keyloggers from running on the computer system. The Anti-Keylogger Tester has been designed to test seven different methods of recording keystrokes on a Windows PC.

A good security software should notice all seven methods and prevent access of the program. A bad one might catch only a few or none at all.

The portable software program works by clicking on one of the seven buttons in the main interface.

Each button activates a different key logging method on the system. The security software should display a warning message once you start hammering on the keys of the keyboard, but at the very least when the user changes the focus to another window or application in the operating system.

All seven methods can be tested in a few minutes on any system running Windows. As mentioned earlier, a good security software should spot all seven different key logging methods. If your program does not recognize any of them, or only some, you may want to consider using a different application instead to improve protection in this regard.

Please note that the program is not available anymore on the developer website. You can however download it from third-party websites such as Snapfiles.

Note that some security programs may prevent Anti-Keylogger Tester from running as it uses methods that are used by keyloggers. While that is a good sign, it means that you cannot run the test on your system as long as the security app is running on it as well.

Anti-Keylogger Tester is a handy security tool to test if your security setup recognizes these seven common keylogging types. While it won't protect you against these attacks, or any other that it does not support, it may reveal how well your current setup is.

Previous Post: « How to wipe a dedicated server before you stop renting it
Next Post: About Relevant Knowledge »