Update Notifier is a free program for Windows that checks if updates are available for installed software programs on the PC it is run on.

An automatic update system like the one offered by GNU/Linux would improve the security and stability of Windows systems significantly. While Microsoft has implemented such a feature in Windows 8 and 10 for store apps, no system was made available for desktop apps that matches it.

Several third-party software managers are available though which we have compared a while ago in our software update checkers overview. The quality differed a lot, from programs that concentrated only on a few dozen applications to those associated with software portals that supported more.

There are two main issues with these types of programs. First, you rely on the company when it comes to database maintenance. If software updates are not added as they happen or software is missing, you won't benefit from the program at all.

Second, false positives. Updates need to be detected for the right version of the program. If you are running a stable version, you do not want the manager to point out a beta update to you, unless you have enabled those as well first. 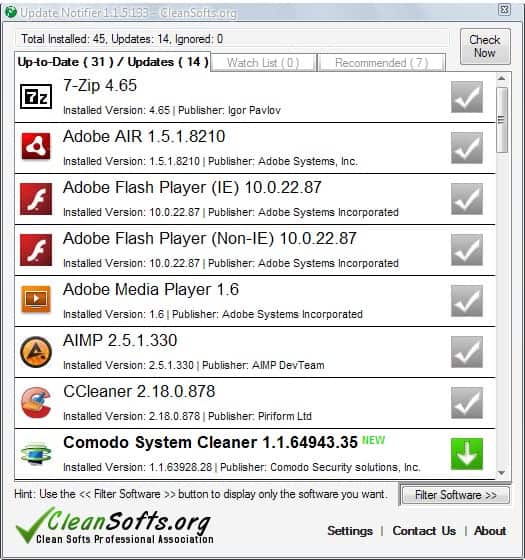 Update Notifier is an alternative updates checker for the Windows operating system which can be installed or run as a portable application. The program uses a clean interface that displays the installed version of installed programs, the latest known version of it and a link to a website from where the application can be downloaded in case a newer version is available.

The results were correct for all tested applications which is something that several of the previously tested software updater failed to do.

Update Notifier can be configured to filter the results list. Filters include the listing of only commercial or free software as well as listings based on the type of update available. The program can also be pointed to a folder on the local computer system containing portable applications to check those for updates as well.

Update Notifier is a handy program  that you can use to check for updates for installed or portable applications. While the program worked fine during tests, its database of supported programs is not the largest. This means that you may need to use other update checkers as well, or use manual checks, to verify all installed programs.

Update: The application has not been updated since 2009 which means that it is no longer of use due to a database that does not seem to be updated anymore. Check out our overview article linked above instead for alternatives that still work.