Comments can be very useful wherever they are allowed. To many comments on the other hand make it complicated to get a good overview of the opinions in the comments especially if comments are listed on multiple pages.

Comments at the popular video portal Youtube can get out of hand in both ways. It is not uncommon to find videos with hundreds or even thousands of comments on the video portal. 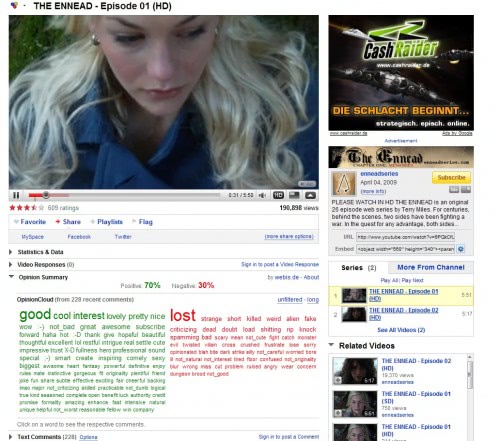 Words that have been used more frequently will be shown in a bigger font size to make it easier to weight the opinions. Each word that is listed in the cloud is at the same time a link to all comments that contain it. A click will display the comments on the same page with virtually no loading time.

This add-on implements opinion summarization for Web comments on YouTube and Flickr. Popular videos/photos often get up to thousands of comments and in order to get an idea about the crowd's overall opinion one has to read all of them, which is of course impractical. The OpinionCloud summarization helps to retrieve this important piece of information by generating an opinion word cloud for a given set of comments.

Opinion Cloud is an add-on for the web browser Firefox that helps users, video creators and marketers on the Youtube video platform.

Update: Opinion Cloud has been last updated in 2010, which indicates that the project has either been abandoned completely by its developer, or that it has been put on ice. It is likely that users of the add-on will run into compatibility issues eventually.