Intype is a plain text editor with coding support

Intype is a text, code and xml editor for the Windows operating system that looks similar to advanced editors like Notepad++ in many aspects. It features the same extensibility and customization options as the popular Notepad replacement, including support for scripting and native plugins.

There is no noticeable difference between InType and Notepad++ in regards to startup time or the loading time of texts or code. 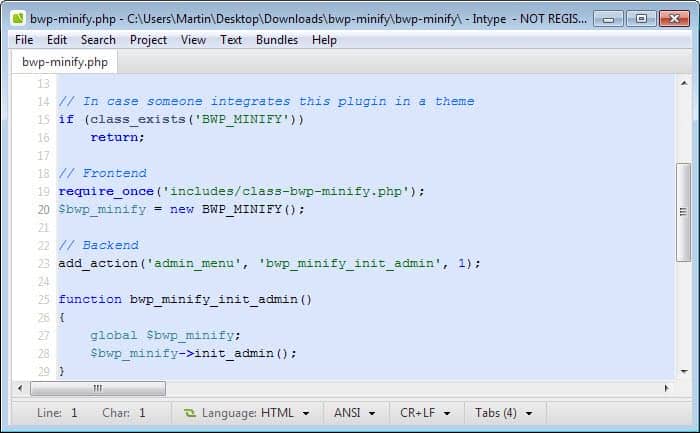 Plugins - which are called bundles in the editor - are available for various programming languages to improve support in the editor so that code is highlighted better and to improve readability among other things.

The project's website offers downloads of additional bundles that can be added to the text editor. The editor is currently in alpha stage. It can be freely downloaded from the developer's website. The FAQ states however that the editor will not be free once it is fully released.

Intype is an interesting program. There is no real advantage over using free alternative such as Notepad++ though, and that is probably the main reason why the program will have a hard time finding customers when it drops the free tag and becomes a commercial program.

Update: The most recent version of the editor is no longer free. It is available for €42 on the developer website. Extension bundles are not available as well anymore on the website. You can however still edit and manage bundles from within the application itself.

The editor supports several other features of interest. It offers project management functionality for instance. Projects allow you to bundle multiple files so that you can load them all at once whenever the need arises.

Intype might be worth a look for users who use plain text editors for coding purposes. It does not however provide access to powerful new features or commands that other text editors like Notepad++ do not offer.

Update: The editor has not been updated since 2013 and while it works just fine, a lack of updates suggests that the project is not receiving the attention that a paid program should deserve.