AppLocker provides a comfortable way of blocking software programs from being executed on a target system running Windows.

While there are other ways to handle the task of blocking computer software programs from being run on a Windows computer system, using Local Security Policy for example, none are as straightforward and easy to use as AppLocker which lets you block applications with just a few clicks of the mouse button.

The application displays a list of popular software programs on start that includes Microsoft Word, Internet Explorer or Nero Burning Rom among others. These applications will be displayed even if the programs are not installed on the system. A click on a checkbox blocks the selected software on the computer system.

It makes sense to display programs that are not installed yet, considering that you may want to prevent a program from running the first time it becomes available on the PC, and not after a user has started to use it. 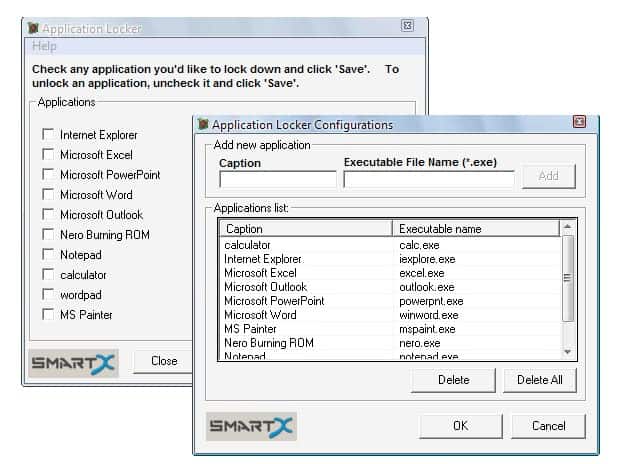 Most users will make use of the Configure menu which can be used to add custom programs to the list by specifying captions and executable file names. It is furthermore possible to remove blocked applications from the list, for instance if you want to allow the execution after all.

AppLocker has been designed to work on terminal servers and workstations. It can be useful to block software that should never be executed on a system, but cannot be uninstalled like Microsoft's Internet Explorer. It can also be useful if a computer is shared by several users without separate accounts.

The only drawback of the software blocker is that there is no protection of the application itself. This means that a user could simply access AppLocker and unlock the application to use it. While that is not always a problem, for instance if you are using a single user machine, it is something that some users may be concerned about.

The main use of AppLocker is to complement the Group Policy of Windows in regards to software restrictions, not to replace it.

AppLocker is a handy, albeit simple, program to add programs on a Windows machine to a blocklist to block them from being executed by users or system processes.

Update: AppLocker has been last updated in 2010. This may be an indicator that the developer has stopped work on the software. It can still be downloaded from the developer website, and according to the information posted there it works with all recent client and server Windows systems.

Update 2: AppLocker is no longer available. We have uploaded the last working version of AppLocker to our own server, as the program is no longer offered on the developer website. Please note that we have down so for archiving purposes only. You can download AppLocker with a click on the following link: AppLocker