FTP is one of those protocols that is largely ignored by the majority of today's Internet users. Back in the early days of the Internet it was common to download drivers, patches and all sorts of files from ftp servers directly.

Home FTP Server is a lightweight application for the Windows operating system that installs a ftp server on the computer system. The question for some readers might be about the use of a ftp server: You can use it to easily share files with friends in a private environment as it can be configured to only allow specific users to access the files on the computer system. You can also run your own FTP server to access your files while you are on the go for instance.

Home FTP Server is just one of many ftp server applications (read FTP Server Setup). It does come with a full set of features but it takes only a few clicks to have a basic ftp server up and running. The ftp server program uses a tabbed interface at the bottom for configuration and monitoring of the ftp server. The most important tab setup wise is the FTP Server tab which offers possibilities to add user accounts, specify directories, change settings of the ftp server and activate it in the end.

There are two ways basically in which users can connect to the ftp server by default. The first is an anonymous connection. This can be used by anyone and security minded administrators should disable that feature. The accessible directories and file rights can be defined for anonymous users in the settings. More important than anonymous users are member accounts. Each member account can be added for a single user or group of users who all share the same starting directory, access rights and restrictions on the ftp server. 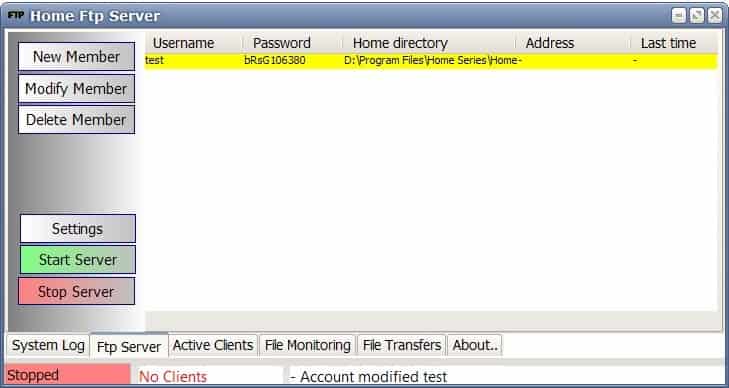 The settings manage every aspect of the ftp server from server and data port to Open SSL support, domain aliases and a web interface. The options of the Home Ftp Server application are quite extensive. Users can be banned from accessing the ftp server and the tool provides the ftp server administrator with the means to monitor files and users easily.

Home FTP Server is an easy to install and administrate ftp server for private usage. The administrative interface is a bit dusty but that's not as important as the amount of options and settings available to the user. The ftp server application has a size of only 1 Megabyte and uses another two of computer memory while running minimized in the Windows System Tray.

Update: Home FTP Server is no longer available on the Internet. The program appears abandoned, and we suggest you check out FileZilla Server for that. Still, if you want to download Home FTP Server, you can do so with a click on the following link as we have uploaded the latest release version to our own server: Home FTP Server