Only three days left before the first Ghacks Christmas Giveaway ends. We have got two software programs and five licenses for each today. WinSnap and WindowSpace are both developed by NTwind who are known for their free Taskswitch XP application.

WinSnap is also known as the Windows Snapshot Maker, a screenshot application that is available as both a portable and regular edition for 32-bit and 64-bit editions of Microsoft Windows. It provides the usual means to take a snapshot of the full desktop, an application, a window, object or region. The option to take a snapshot of an object might require some explanation. This option makes it possible to take a screenshot of several elements on the screen. Say you have two open windows on the screen and want to include both in the screenshot but not the rest of the desktop. This can be done by selecting the Object mode which makes use of the [CTRL] key to mark several objects before the screenshot is taken.

A new screenshot will be displayed in the main interface of the software program. It can also be set to be automatically saved to the computer's hard drive or copied to the Windows Clipboard which can save quite some time if you take screenshots regularly. The filename, image format and quality can also be defined in the options. The defaults are the png image format with a quality setting of 85%. Several effects can be applied to a screenshot taken with WinSnap. They are divided into the categories coloring, shadow and misc. Coloring can be used to change the coloring of the screenshot to grayscale, sepia or inverted colors. Shadows will add shadows to the outlines of the screenshot and misc makes it possible to add contours, watermarks and to rotate or scale the image.

Hotkeys can be used for the main functions in WinSnap. Each of the five different screen capturing modes can be initiated with a global hotkey for maximum comfort. Another interesting option is the external tool support menu which can be used to add external tools - like image editors - to the software program. Only Microsoft Paint and an option to save the screenshot to the computer desktop are available by default.

WindowSpace on the other hand is a window manager. It is supplied as a 32-bit and 64-bit Windows version. 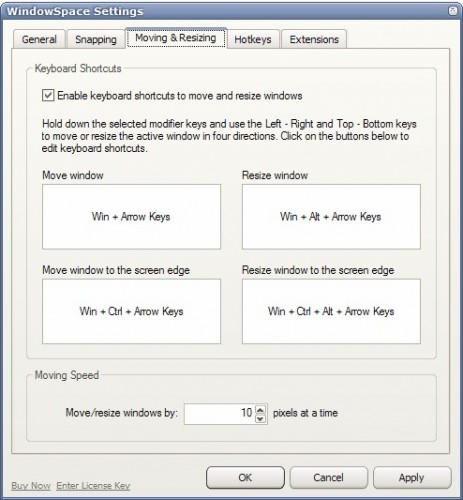 The software application can be used to work with windows in Windows more effectively. Two of its main functions are window snapping and moving & resizing. The application is completely hotkey driven but some functions can also be used regularly without hotkeys.

Window Snapping describes the process of snapping the active window to another window (outer or inner edges) or the screen border. Windows can be moved or resized with hotkeys which is excellent for users who prefer the keyboard over the mouse.

Several global hotkeys are available to maximize, minimize or hide windows instantly. There are also options to tile or cascade windows.