If you load to many applications during startup you might notice that this might delay the startup even further because of the system resources required to load the applications at the same time. A better way to deal with startup applications would be to load them in sequence instead ordered by level of priority.

Delayed Exec is a free software program to delay the execution of startup programs. It displays all applications that are started during system start including their title, command and the user. 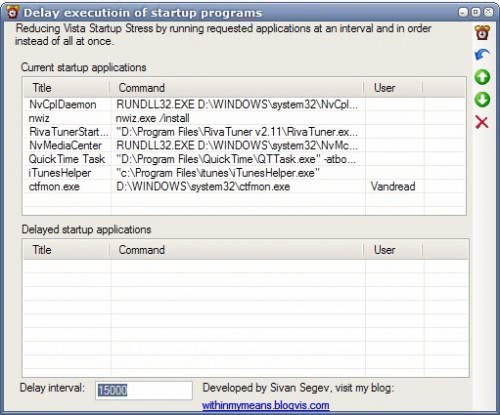 Update: Delayed Exec is no longer available. We have removed the link from the article and suggest you use Startup Delayer now.

Update 2: Startup Delayer is now available as a free standard edition and a premium version that needs to be purchased. The premium version on top of the features that the free standard version provides offers backup and restoration options, startup profiles, an ad free interface and the conversion of tasks to startup applications.

Windows Vista and newer users can configure services to start delayed in the operating system. While that does not include programs, it may be good to know that this is possible. It may still make sense to run Startup Delayer to speed up the system start of the operating system by delaying select applications from running directly on system start.

You can check out the review of the latest Startup Delayer version by following the link.