Desktop effects like snow, water or stars are not for anybody. There seems to be a connection between users who like those effects and other things that annoy most users like animated gifs or a house decorated with blinking Christmas lights.

If you belong to the group who likes those effects - or want to give the kids something to play with - you might want to check out Znow Desktop.

It is a software that can produce a variety of desktop effects and even comes with an editor to create new effects. The default application comes with about 15 desktop effects that range from snow to stars and more unique effects like northern lights, an aquarium or beer. 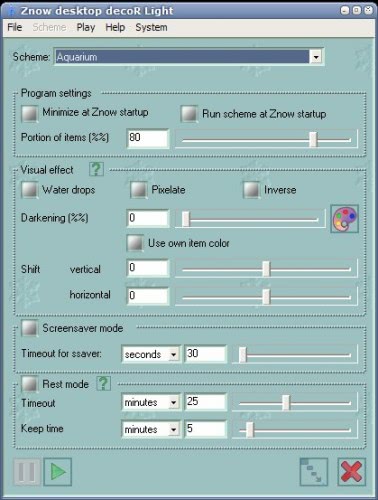 All three effects will add effects directly to open windows which will stick for as long as the application is running. There are options to apply the effects in screensaver mode or rest mode. Screensaver mode acts like a normal screensaver while rest mode will start the effect after a given time.

Update: A recent test of Zsnow on a 64-bit version of Windows 7 Professional revealed that it is not compatible with the operating system. It froze other applications, Firefox for instance, which makes the application unusable on those systems. Desktop Snow OK is an alternative that is still fully compatible with recent versions of the Microsoft Windows operating system. The portable program does not slow down or freeze applications on the system like Zsnow does.

It ships with a configuration menu to change the amount of flakes, the transparency and speed, as well as image and textures. From snow flakes to various flower types or stars, there is something for everyone here.