Learn an alien language with Tork

I don't usually blog about games, but this one is so great, simple, yet unique and quite a challenge that I just have to show you. The premise in Tork (a play on the word "talk") is that our antagonist crash lands on an alien planet where everyone speaks in sign language. The basic task is to learn the language, so you can fix your spaceship.

Update: Tork is no longer available unfortunately. Check out the Hello World link at the bottom for a language learning alternative.

What I love about the game is that it is a true learning experience and gives you a bit more than small flash games nowadays. After you "hear" a symbol you can say it to someone else, based on the reaction you get you will eventually decypher it. You can write down what you think a symbol means and it will be displayed before you try to say it. Since a sentence can contain a maximum of four symbols, you eventually get to some complex stuff.

The game looks great, and although the controls are a bit clunky, playability and UI wise it's great. the language is loosely based on Esperanto and Mayan, take a look at the info on the site, so it is somewhat realistic, the bare bones of what linguists have to do for real languages. If you think you're up to translating the language of an alien culture, give it a go! 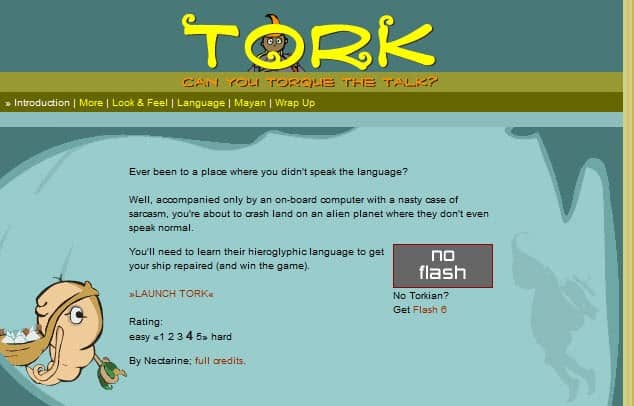 It would obviously be a lot nicer if the game would teach a real language and not a fake alien language. While it still may be a fun experience, it may make sense to let your children learn a "real" language instead.

Article Name
Learn an alien language with Tork
Description
Tork was a browser-based Flash game in which the player had to learn a language on an alien planet after crash landing on it.
Author
Daniel Pataki
Publisher
Ghacks Technology News
Logo

I'm a 24 year old guy writing blogs, playing music, singing, playing bowling, reading, doing a bit of handcraft, working away on a number of projects, the list just seems to grow and grow, and that's the way I like it :)
View all posts by Daniel Pataki →
Previous Post: « Best free (and open-source) FPS games
Next Post: WOW Addons Updater »