Whilst first person shooters are mainly confined to the console, several good FPS games are available for PC. I'm nothing more than a casual gamer but I enjoy shooters and I was surprised by the sheer number available. I use a Mac, so this article will primarily focus on cross-platform shooters.

AssaultCube is a quite simple 3D FPS available for Linux, OS X and Windows, which just reached version 1.0 about a week ago. The graphics are not very advanced, but a benefit of this is that it's easier to run a server and that it can run on nearly any machine.

The best aspect of AssaultCube is the online play; there's always a few busy servers available where one can play capture the flag, deathmatches or variations on those modes. AssaultCube is limited to seven weapons: sniper rifle, assault rifle, handgun, grenades, knives, shotgun and submachine guns.

Maps can be created for AssaultCube quite easily.

Sauerbraten is an FPS built on the same engine on which AssaultCube is built but has much more sophisticated graphics and is built in a fantasy world as opposed to a real one.

In Sauerbraten, weapons include crossbows, guns and rocketlaunchers. This is definitely a more interesting variety than AssaultCube! Once again, CTF and deathmatch are popular game modes.

The game notably lacks a crouch mechanism and struggles to run at higher resolutions on my MacBook Pro. However, it is an amazing open-source game with many fantastic maps.

Once again, Sauerbraten is orientated towards online pay but the CPU games are much better than AssaultCube's.

Interestingly, the game can also be played as a 3rd person shooter!

Nexuiz is an FPS with quite fictional weapons, like electricity guns etc. The game clearly belongs in the realms of fantasy, being set on a space station where one must shoot aliens.

I find the game difficult to play. Movement is far too fast compared to Cube engine games and it really does require quick reflexives.

The game isn't smooth either. Before a game starts, there's a text-only screen telling me what is loading etc. and the menu at the start looks terrible, especially at my screen resolution.

It's still a fantastic game to play, however. 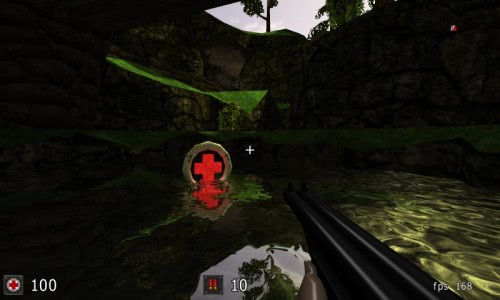 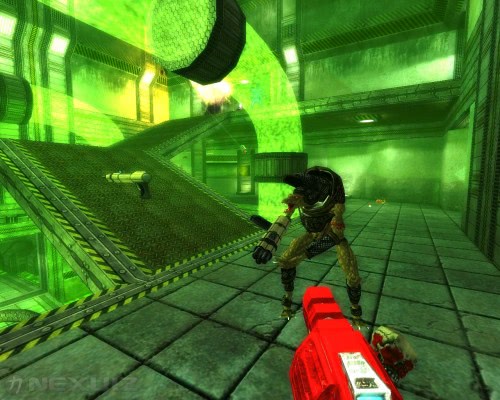 Needless to say there's scores of other good games, these are just my favourite free (as in beer and freedom) shooters.