The first week of the Ghacks Christmas Giveaway has passed and I can already assure you that it will not be the last giveaway here at Ghacks. The majority loves the products that I have selected so far and I hope that this trend continues in the coming three weeks. Today's offer is the file synchronization software GoodSync from the makers of RoboForm.

Goodsync provides the typical left / right interface that many file synchronization software programs use. One interesting aspect is that it can not only be used to keep files in sync but also to backup them. Both operations are started as so called jobs. A job consists of a few steps that the user has to configure.

A file synchronization requires the selection of two folders that should be kept in sync. This can be used to sync emails, documents, music and anything practically anything else that is needed in more than one folder.

The analyze button will scan both directories and display the folders, files, sizes and additional information of both sides. The program will also list the space requirements on both hard drives if the synchronization is started. All files and the direction that they are copied will be shown as well.

Goodsync can also change the display mode so that only conflicts, errors and other information such as the sync state will be displayed.

Users can finetune the process before starting the synchronization. It is for example possible to exclude folders or files from synchronization or change their direction. The default sync direction is a two-way sync but it is possible to change that to a one-way sync easily in the options.

Filters can be used to exclude certain files or folders from the synchronization. One of the most important aspects of a file synchronization software is the support of storage space. GoodSync supports synchronization and backups on local hard drives, network drives, ftp, sftp, Amazon S3, WebDav and WinMobile hardware. It is therefor no problem to sync files from ftp or sftp to the local computer.

Once everything has been configured according to your wishes you can the automatic options. It's much like a scheduler. You can set the interval or event when the file synchronization software should analyze or sync files and what the software should do if conflicts are encountered.

The options are also the place to create global filters and to change other options like the buffer size or if locked files should be copied. 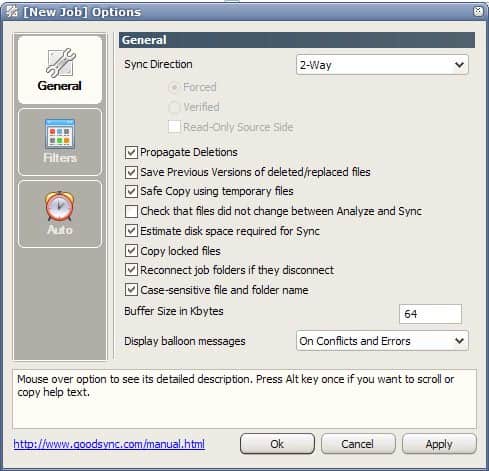 Experienced users will like the sheer amount of command line options that are provided by the file synchronization software. There is practically a switch for every option of the software to synchronize or backup files. It is possible to import or export the job list to run it on multiple computers.

Every user is able to create file synchronization or backup jobs with GoodSync in a few easy steps. Experts will love all the settings and options to tweak the software.