The final version of the XBMC has been out for a while now. We covered an alpha release back in August and it is time to check on the final release and promote the product further. It may sound a bit biased but I'm using the XBMC for years on my old modded Microsoft Xbox system. While it has seen some gaming in the past the main reason for modding the system was to add the XBMC to the Xbox to be able to watch movies and videos that have been ripped or downloaded on the television and not on the computer.

XBMC has been expanded since then and it can now be installed on various platforms including Windows, Linux or Macintosh computers. It is intended to be used for media PCs (like the Xbox but with additional features) that stream the media to the television but it can be installed on any computer meeting the requirements obviously.

The interface has been designed with usability and wow effect in mind. Links to video, music, images, settings and plugins are available from the main menu. The first three entries lead to similar sections of the media center. The user has to first pick at least one data folder that contains files that can be read by the player. This takes a few seconds at most and it is possible to navigate with the keyboard, mouse or gamepad in the menus. 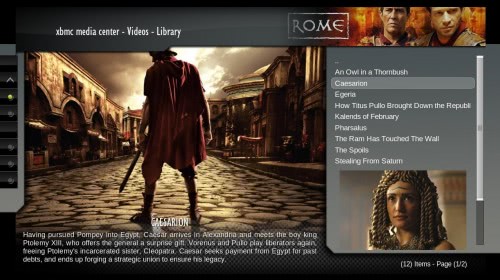 The media center will pick up metadata automatically but it can also search the Internet for additional information like movie posters, plot summaries or actors.

Plugins enhance the system further. They can add all kinds of new functions to the system like games, communication, news and service integration (Youtube, Apple Trailers, Podcasts).