My Encrypted Tunnel is a basic System Tray application that can be installed as a Windows Service to establish and maintain TCP SSH tunnels.

The Internet Service Provider can see what data is transferred as well and there are more examples..

A SSH connection can be used to use an encrypted channel to transfer the unencrypted data so that the data is protected from third parties.

To make use of this encrypted channel a connection has to be established and maintained between the local computer and a SSH server on the Internet. If your Email provider offers SSH access for instance it could be setup to create a connection with their SSH server to retrieve and send emails.

My Encrypted Tunnel is a free application that makes use of Putty Link to establish an SSH connection:

MyEnTunnel is a simple system tray application (or NT service) that establishes and maintains TCP SSH tunnels. It does this by launching Plink (PuTTY Link) in the background and then monitors the process. If the Plink process dies (e.g. connection drops, server restarts or otherwise becomes unreachable) MyEnTunnel will automatically restart Plink to reestablish the tunnels in the background. It tries to use as little CPU and system resources as possible when monitoring (When the "Slow Polling" option is enabled it only does one context switch per second). 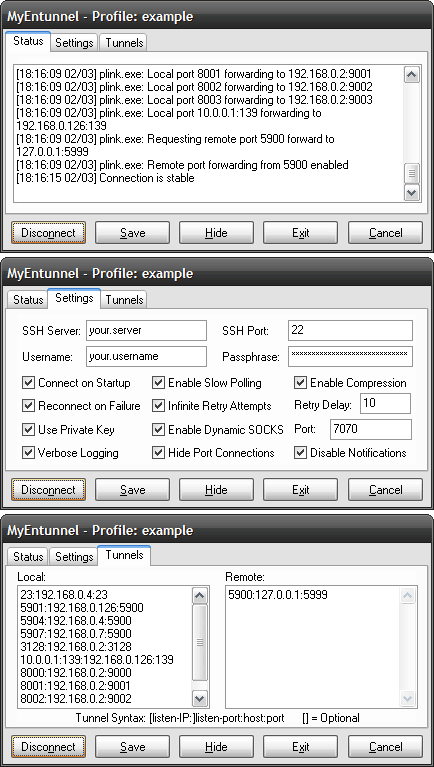 It can also be used to exchange data between two computers. To do this one computer needs to act as the SSH Server. Users looking for an advanced Windows client with additional functionality might find it in Tunnelier which is free for personal use.