Get Your own TV Channel at UStream

How many times have you turned on the TV and thought â€˜Hey, I can create better shows than what's on'? If you're one of those people with a penchant for creating your own videos, you now have a place to show them off. You can use UStream.

Ustream is a live interactive video broadcast platform that enables virtually anyone with a camera and an Internet connection to create their own video and broadcast it to a global audience. Ustream is both quick and easy to setup and use. The site claims that creating a channel takes as little as two minutes.

Ustream's interactive broadcast functionality has a one-to-many capability, allowing the broadcaster to interact with viewers as well as viewers to interact with each other. If you want to broadcast your own show, you do have to be a registered user but this is no different from having to register to upload YouTube videos.

Ustream has already gained a lot of popularity thanks in part to having being used by virtually every candidate in the U.S. Presidential elections. Other prominent broadcasters listed are celebs like Miley Cyrus, cast members of â€˜Friends', and Johnny Knoxville. Ustream has also been used to broadcast events like this year's SXSW and the UN climate change summit at Bali. 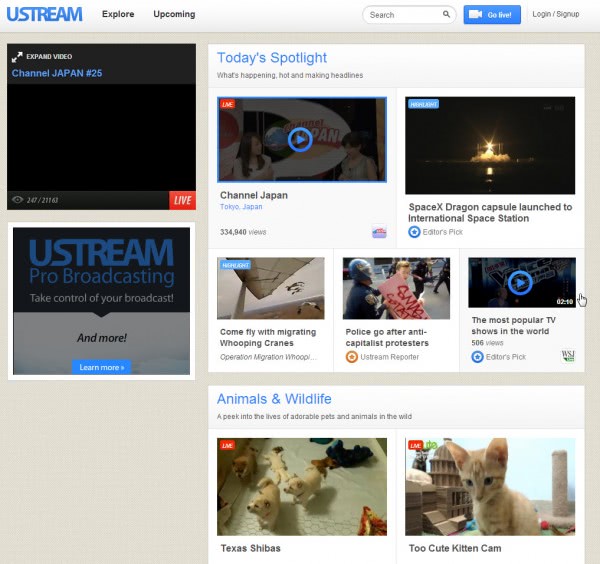 I don't really see many disadvantages of UStream's service except for the obvious one of needing a reasonably fast Internet connection. I also wonder if it's possible to prerecord a show and broadcast it at a specified time.

View all posts by Cheryl →