AltMove is a portable software for Windows that extends the interaction possibilities between windows and the computer mouse. It adds seven new actions to various keyboard and mouse combinations. Among them interesting options like creating a screenshot of the active window with right Ctrl and a left mouse click, minimizing or maximizing windows by pressing the right mouse button and dragging it down or up, or changing the transparency of a window by pressing the right mouse button and dragging the mouse to the left.

All seven default actions can be turned off in case they are not needed or interfere with existing applications. It is also possible to change the action by assigning different keys and mouse buttons / movements to it.

One of the main features of AltMove is the creation of new actions. A new action can be created by selecting a template from ten available ones. Among them hiding windows, emulating keystrokes or making screenshots. 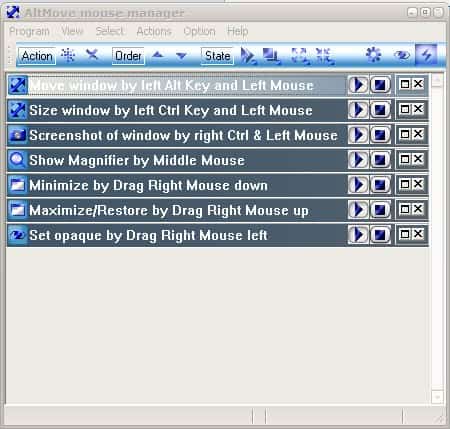 A click on ok will load the selected action in the main interface. The user has to assign one key and a mouse button for the new action which becomes active immediately afterwards. Some of the features, like moving or resizing windows, ignore restrictions which means that it is possible to resize windows that are usually not resizable.

Update: The program has been updated several times by the developer ever since it was first released in 2008. New versions include support for multi-monitor PC systems, new actions document actions and a redesigned user interface. The program is compatible with all recent 32-bit and 64-bit editions of the Microsoft Windows operating system.