AutoSave Essentials is a new commercial backup software developed by Avanquest which can be used to backup important data with minimal user interaction.

That is the biggest selling point of the software. It comes with three predefined backup plans for music, documents and photos, and minimizes the time a user needs to configure the backup software provided that data is stored in those default locations on the Windows system and that data needs to be backed up.

Instead of having to know where photos are stored in, to take the example, you'd simply select photos and let the software do the rest for you.

Additional options are available to save the complete My Documents folder using a backup plan, and to save Web Settings which will essentially save Firefox and Internet Explorer cookies and user data.

Those predefined backup plans are great for inexperienced users who don't feel like configuring a backup software.

Configuring those custom backup plans is a breeze compared to other backup solutions on the market, as it does not require that you select paths that you want to back up. You can still select paths on the other hand if you want, but that is no requirement for using the application.

All options can be configured with just a few clicks and are therefore accessible for users of all experience levels. The backup software will automatically recognize if a selected device is not present during scheduled backups and will start the backup as soon as the device comes online again. 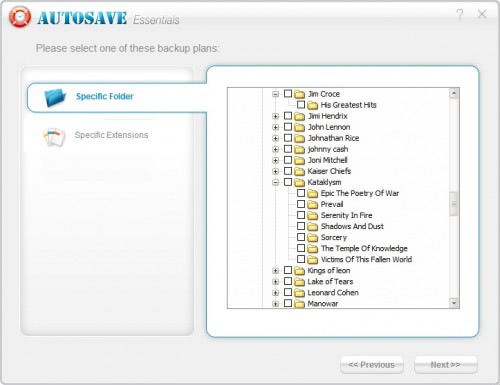 Backups can be scheduled to run once a day, week, month, during system start, continuously or manually only. Continuously monitors the selected files and folders all the time and starts the backup whenever file operations take place.

Each of these operations will take place in the background with virtually no interference with important system processes or other work that takes place at the same time.

The biggest selling point of AutoSave Essentials is the ease of use. Users who store their important data in the My Documents folder can virtually use the application without interaction of the backup destination drive is the correct one.

It works out of the box for those users. Others will have to add backup plans manually but this operating requires minimal user interaction as well.