Not all tabs are equally important. The four most important ones are Data CD, Audio CD, CD Image and Video DVD. Files can be added easily using the Windows file browser. One important tip is that the size bar at the bottom does not change automatically depending on the files that are added to the disc burning software. A right-click makes it possible to change the size from 650 Megabytes to dual-layer DVDs with 7.96 Gigabytes. 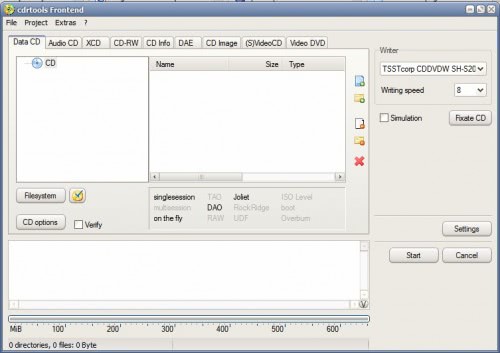 There are unfortunately a few disadvantages that might not play a role for most users but surely will disappoint a few. The only supported image format is ISO which means that other image formats like img are not supported by ctrtfe. Users who will only burn data and audio CDs and DVDs but no images will be perfectly happy with the disc burning software while those that work with multiple image formats will have to find another tool or a possibility to convert image formats into ISO.