If you have ever worked with colors before, be it in an image editor or while designing a website, you may have experienced troubles picking the right color. Maybe you have seen a nice color in an image, application or website and would like to pick the exact same color for your project as well. Image editors are only able to pick colors from images that have been loaded into them but they cannot tell you the color that an application uses.

You could make a screenshot of that application, load that into the image editor and pick the color that way or you could use a color chooser like Pixel Pick to do that for you in a fraction of the time.

Pixel Pick (via Instant Fundas) is a portable application which ran without issues on our Windows XP test system. It should run fine on other Windows versions as well. The software developer does not provide information about compatibility on the website though. 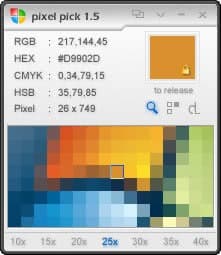 Choosing a color is a simple process. Pixel Pick immediately displays the colors that are beneath the cursor. The user can set the application to be always on top which is probably a good idea. It is still hard to pick the exact pixel which is why Pixel Pick comes with a screen magnifier that makes it much easier to pick the right color from the area that you are hovering the cursor over.

The color chooser is displaying the color information as hex, rgb, cmyk and hsb plus the exact position of the pixel on the screen. Each value can be copied with a left-click so that it can be imported into the image editor or another application that requires the input. 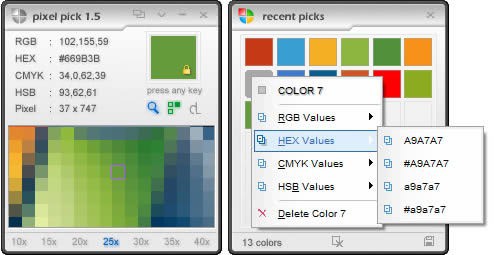 The software program comes with a history of the latest 36 colors that have been saved by the user. This list can be exported.

It took a while before it became apparent how the history function was working. Here is a tip that will speed up the process for you.

After moving the mouse on a pixel that should be examined you need to press a key on the keyboard to add that pixel to the history. The application will automatically switch to the next box in the pixel history (remember there are 36) and the user can use the mouse again to pick a pixel on the screen.