Users who want to change the Windows XP theme are left with two choices. They can go the official way and use the few official Windows XP themes that have been released by Microsoft, or they can patch the uxtheme.dll file to be able to use user created XP themes. The first way is the easier one but limits the themes to a handful while the second requires patching a Windows system file but rewards the user with thousands of Windows XP themes.

The official XP themes have the advantage that they can be used right away. Royal Noir is a Windows XP theme that was discovered about two years ago. It comes as a blue and black theme with great contrasts. Third party themes on the other hand may require you to download additional tools for some of their functionality, like a different taskbar or icons.

Installation of Windows XP Royal Noir is a breeze. Just download the Royale Noir package and unpack it on your computer. The contents have to be moved to windows\resources\themes\royal noir. A click on the luna.msstyles file should be located in the royal noir directory will activate the theme and bring the Display Properties to the front. 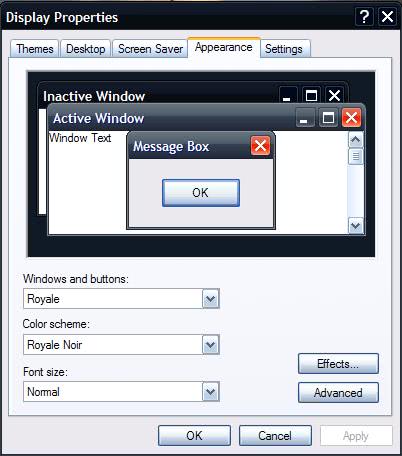 You can make additional modifications here which you may find useful, like the windows and buttons design, or the font size.

Please note though that the theme is only available for Windows XP and not for other Windows operating systems. We are offering the Royal Noir theme download on our server now, as the default download is no longer available.