The first operating system that I setup on my new computer was Windows XP which I then updated to Service Pack 3 to make sure all the updates were installed properly before I connected it to the Internet.

One thing that I noticed when I tried to change to my favorite Thallos theme from the default Windows XP theme was that it was not possible because I forgot to patch the file uxtheme.dll which protects the system from third party themes.

While it is possible to install official themes, there are only a few available for Windows XP. If you want to install a third party theme that modifies the design of the operating system in many ways, you will have to patch system files that act as a protection against these kind of manipulations.

The uxtheme.dll patcher that I had installed on my previous system was not working anymore because Microsoft seemed to have replaced the uxtheme.dll file with a newer version which had the result that the patch failed. A quick research on the Internet brought me to Rafael's website that offered a patched uxtheme.dll that was compatible with the English Windows XP Service Pack 3 final. 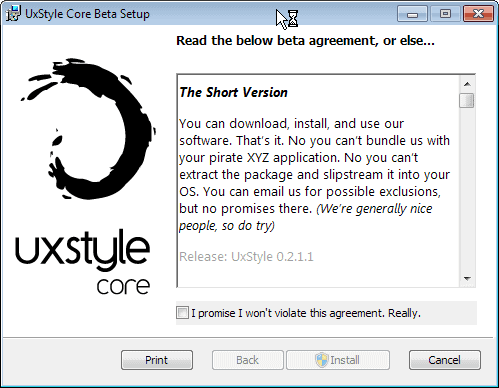 I then used the small application Replacer to replace the existing uxtheme.dll in c:\windows\system32 with the patched one. Replacer displays a command window upon execution and all that needs to be done is to drag and drop the original file and then the new file into the window. Everything else will be done by replacer.

I was able to change the theme after the next reboot.

Update: Rafael has modified how the UxStyle program works. Instead of having to patch the files, the latest version does not modify them in any way. Instead, the changes are only loaded to memory.

In addition to that, the program works on all recent versions of the Windows operating system as well, not only on XP. All you need to do is download the version of the program for your operating system -- the downloads are divided in Windows 7 and earlier, and Windows 8 and later -- extract the contents of the archive to disk, and run the 32-bit or 64-bit version afterwards.

Martin Brinkmann is a journalist from Germany who founded Ghacks Technology News Back in 2005. He is passionate about all things tech and knows the Internet and computers like the back of his hand. You can follow Martin on Facebook or Twitter
View all posts by Martin Brinkmann →
Previous Post: « Fix F8 does not load safe mode on your computer
Next Post: Windows Boot Timer »