Highlight is a free program that you can use to format code in a better way. It turns the source code -- of supported programming languages -- into formatted text with syntax highlighting so that everything is a lot easier to go through.

The application is fully platform independent and the software developer provides versions for Linux, Windows, Mac and even a Notepad++ plugin although for an older version of Notepad++.

Highlight's source is included in the download, even in the Windows version which is slightly unusual. Installation should not pose a problem at all, the user is asked if he wants to add a Send To entry to Windows that could be used to right-click documents and send them to Highlight for faster processing.

The Source Code Analyzer is compatible to more than 120 programming languages from HTML over PHP to c++ and CSS. It is probably a good idea to change the default skin of the software to a skin that adds contrast to the source code. The skins do not change the main program interface but display the source codes in the right pane in different colors so that the readability of the code may improve depending on the selection.

It can mimic the colored output of your favorite text editor, with many editors such as LaTeX, SVG, TeX supported with color schemes. 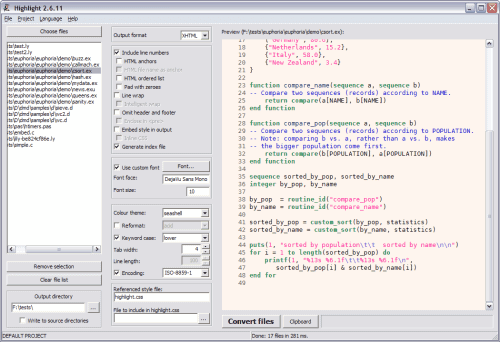 Highlight uses a three tiered interface. The left pane contains the sources that have been loaded into the application, the middle pan is being used to change certain options like line wraps, numbering of lines or the output format (html, xml, xhtml, latex, tex, rft and svg) and the right pane displays the currently active source code.

The program provides an interesting alternative especially for those users who edit source code with a normal text editor as you can not only go through the code to analyze it, but also edit it right in the interface.

You can even create your own plugins to tweak the syntax parsing and coloring features of the application further.

The author provides you with samples and examples on the official home page that you can make use of to configure the application or to create your own customized version of it.

If you do not use a programming environment such as Eclipse, Visual Studio or Android Studio, or prefer a faster loading program sometimes, then you may find Highlight an ideal candidate for that.

The application is regularly updated with new features by its author. These updates may add support for additional programming and scripting languages, themes, or other program features.