The time would eventually come that Mozilla would remind Firefox 2 users that a new version of the web browser has been released. Mozilla released Firefox 3 some months ago in 2008.

The new version that the organization released recently is Firefox 3.0.1, and it could have delivered quite the shock for Firefox users who decided to stick with Firefox 2. Reasons for not wanting to upgrade to Firefox 3 boil down to unwanted changes in Firefox 3 like the new location bar, changes in bookmark storage or RSS news feed handling.

Nevertheless, Mozilla will display nag screens in Firefox 2 installations that tell users that a new version of Firefox is available.

Users have the option to get the new version right away, to postpone the upgrade for 24 hours by selecting later, and to select never. While never should really mean never, it may only mean never for this particular release version of Firefox, and not all future versions of the web browser.

It is quite surprising that selecting never could still mean that the user will receive another update notification in the future. Check out my Firefox 3 switching experience that highlights how the upgrading went on my systems, and an article on excessive Firefox CPU usage which some Firefox 3 users complained about after making the upgrade. 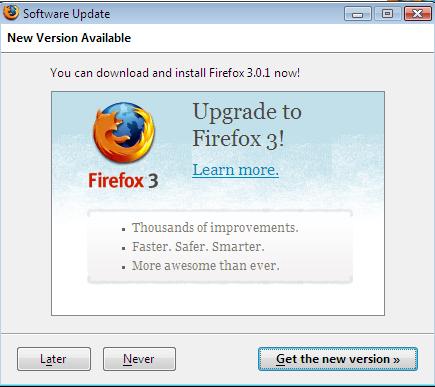 It is also recommended to backup personal settings before updating to the latest version of Firefox; check out the Backup Firefox guide if you need help with that.

Firefox 3 is a good browser and the initial problems that I had are almost all gone. I had to make a few compromises to get there but I would say that it was worth it in the end.

Update: Firefox 3 users will run into a similar situation as their web browser is ending its end of life come April 2012. While it is not clear how Mozilla will inform Firefox 3 users that they need to upgrade to receive security and stability updates, it is likely that update notifications are displayed to those user sin a similar fashion.

Martin Brinkmann is a journalist from Germany who founded Ghacks Technology News Back in 2005. He is passionate about all things tech and knows the Internet and computers like the back of his hand. You can follow Martin on Facebook or Twitter
View all posts by Martin Brinkmann →
Previous Post: « Perspectives Makes Firefox That Much Securer
Next Post: Paragrasp Improves Article Reading In Firefox »