NetTools is a server monitoring software that shows quite some promise. The main advantage of NetTools is at the same time its biggest disadvantage: the software program runs on a Windows computer which means that it's virtually impossible to let it monitor servers 24/7 unless the computer is always on.

The Server Monitoring Software however is offering an incredible amount of tools and options to monitor networks, servers and websites of which some are restricted to the commercial version of the monitoring software.

You can add a number of IPs or domain names that you want to monitor by the software. It monitors response time and packets in real time and displays graphs for the data as well.

Alerts can be set if the host is not responding or if the server response time or packet loss rate reaches a certain threshold.

Four events can be configured: Message on the desktop, send an email, play a sound or show an icon in the system tray. 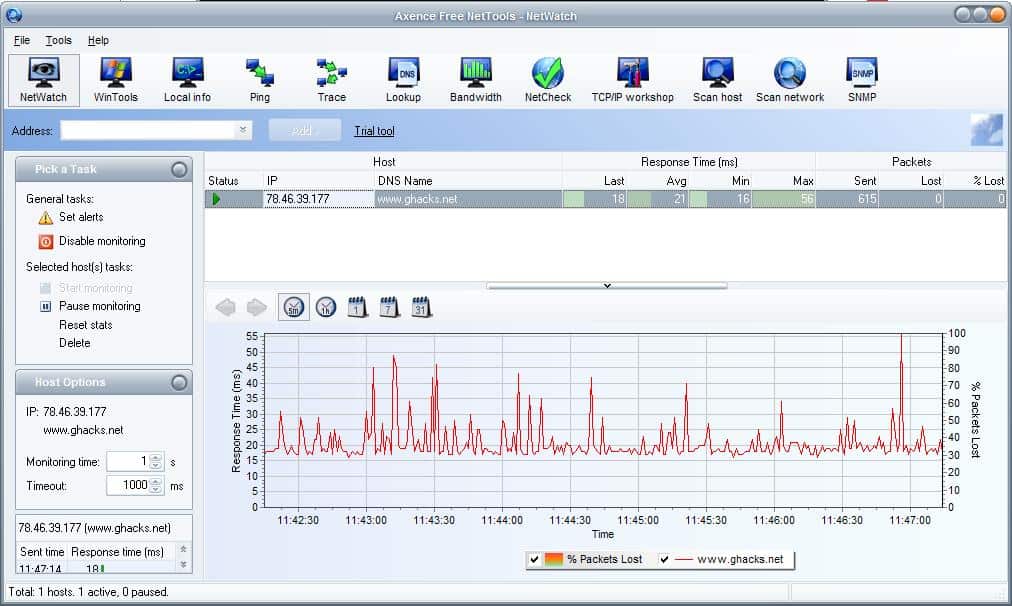 The free version of NetTools provides access to several network tools like Ping, Lookup or Trace but also more advanced tools like network and host scans which you can use to analyze various network and connection related conditions.

I personally think it's a bit unfortunate to mix free and commercial versions into the free version which might confuse the user at the beginning. Networking Monitoring Software Look@Lan offers most of the features as well but is completely free.

Update: The free version of NetTools is no longer available on the developer website. Only the commercial version of the program is still available there. We have removed the link therefore to the website, and suggest that users take a look at Look@Lan instead which is still available for free on the Internet.

Martin Brinkmann is a journalist from Germany who founded Ghacks Technology News Back in 2005. He is passionate about all things tech and knows the Internet and computers like the back of his hand. You can follow Martin on Facebook or Twitter
View all posts by Martin Brinkmann →
Previous Post: « Registry Cleanup with RegDefrag
Next Post: Microsoft Office Live Update »