Microsoft is trying to prove to the world that Windows Vista is not as bad as a large portion of the public and press is seeing it. The Mojave Experiment is just one way by tricking Vista critics into believing that they review a new Windows called Windows Mojave while they are actually seeing Windows Vista in action.

Seeing might actually be the biggest problem in proving the point. Microsoft is very tight lipped about the experiment itself and the preview page that was up until earlier today mentioned a ten minute demonstration from a sales person on a 2 Gigabyte Intel Core Duo 2.2 Ghz HP computer.

Now that the website is up and running users can view short clips, really short ones from normal people who participated in the experiment. The website holds little information but at least a user breakdown. About 84% of the users are Windows XP users, 22% Apple OS users, 14% use other Microsoft Windows operating systems and 1% Linux. It seems that some users are accustomed to more than one operating system. 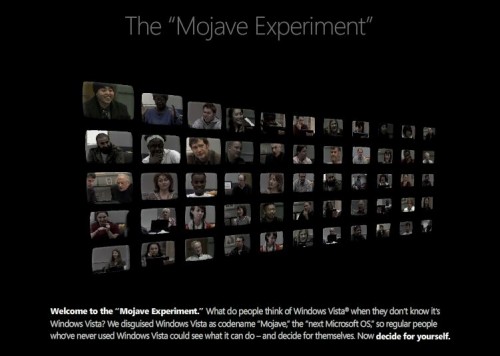 Some videos show that one person is actually demonstrating features of the "Mojave" operating system to the users, for example photo stitching that takes pictures and creates a panorama out of those photos.

That's probably a very good way of getting the "wow" effect from people first by showing them nice features on fast hardware and then again by telling them that they did see Vista and not a super duper new Microsoft operating system.

It does however fail to cover important aspects of Vista criticism like that it is running extremely slow on older hardware even if the computer was purchased with Windows Vista or incompatibilities that still exist.

Update: Microsoft has pulled the website again, it is no longer available on the Internet. That's not really surprising considering that Windows Vista is not actively advertised anymore.