You Are Sharing Files

I just send a letter to your ISP telling them that you are sharing files. I did not have to prove my claims because I'm in high standing. Your Internet Service Provider is now sending a DCMA takedown notice / a warning letter / a three-strikes-and-you-are-out letter to the owner of the IP that has been found to sharing files illegally on the Internet.

No, I won't reveal my methods to you or anyone else. The evidence is solid and you have to take my word for it, and remember, I'm in high standing and trusted. My commercial interests do not play a role, I work thoroughly..

While this could look like a joke it is unfortunately reality in several parts of the world. Last to join the party are users from the United Kingdom who will receive warning letters send from their Internet Service Providers who received the information from the British Phonographic Industry who do not disclose the process of gathering the data in first place. 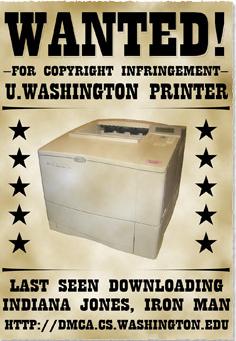 Scientific studies have shown that the data gathering process of most organizations that send out DMCA notices is flawed and provided access to several methods that explained why. One of the methods was to actively frame other users and they managed to get DCMA takedown notices for one of their network printers to prove the point.

There is definitely a problem with the system if the British Phonographic Industry has the unchallenged might and right to notify the Internet Service Providers of copyright infringements and make them send out warning letters to their customers.