Itâ€™s been a long time now since Yahoo acquired del.ico.us. Like most Yahoo acquisitions it was a great service and grew rapidly in popularity, but unfortunately was left to stagnate somewhat.

Frankly del.icio.us was one of the founding Web 2.0 services, along with Wikipedia, Amazon and Ebay. Itâ€™s the most popular social bookmarking service, even though the social aspects are ignored by many of the users.

For better or for worse it also popularized the web 2.0 URLâ€¦ full stops are no harder to type then forwards slashes, but it sure feels like it.

Anyway it looks like the new Delicious service will be launching VERY soon. Thatâ€™s right, del.ico.us has now officially become Delicious, although theyâ€™ve had the URL for years now.

Tech Crunch posted some screenshots a while ago which showed the new service to be pretty impressive, a complete code re-write, a cool new theme and interface and a stack of new features.

Apparently scalability was an issue which has held up the release for a year now. Ironically it was also the initial reason for the complete re-write. 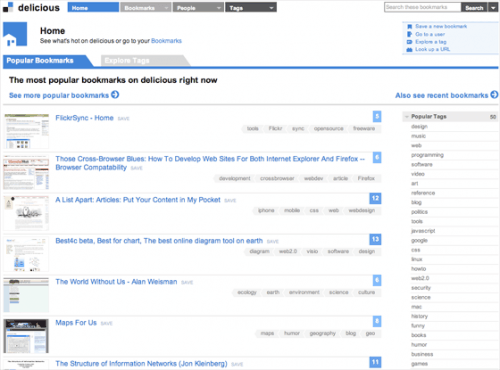 Anyway, with the official blog providing assurance that â€œAfter months of work, the new Delicious is almost ready to come out of the ovenâ€ it may very well be true this time.

When it launches youâ€™ll be automatically logged out of your account. I hope you guys will be able to handle thisâ€¦

Personally, while an update will be nice, I never use del.icio.us through the web interface. I use it purely as a way to store my bookmarks online, no friend sharing, no visiting the homepage nothing. Flock 2.0 has awesome integration with del.cio.us and thatâ€™s how I use it.