I'm not really into a streaming solution for videos that are available as torrents because I prefer to download the video to have the option to play it whenever I like and not in the instant it starts playing during the download.

It could be however an interesting option to preview the video before downloading it completely. Maybe it does make sense for users who do not want to download the videos but view them right at the moment only.

RarPlayer combines the media player VLC with a software that can download and process video torrents. It supports the most popular video formats like avi or mov but unfortunately cannot cope with archives that contain videos. This means the video has to be available in its original format and cannot be made available as an archive. 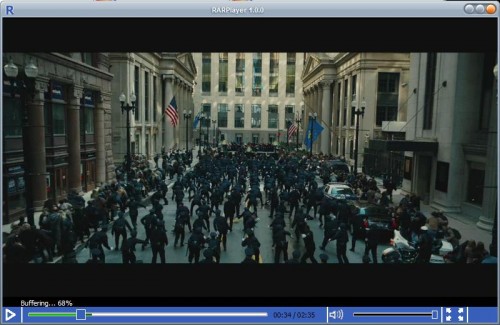 The program achieves this by downloading the first parts of the video at the beginning so that it can start playing after a short while. It obviously depends on the number of seeders on how fast the video can be played. It can happen that it stops somewhere in the middle because it needs to buffer again.

My main point of criticism would be the lack of controls of the player itself. I was not able to rewind which is probably because of the streaming process but it becomes terribly annoying if you watch for about a minute and notice that the player stops playing and starts buffering again. It would be nice to have some kind of buffer to rewind a short time to play the video again from a certain point.

It also seems to crash quite often if you feed it with torrents that point to unsupported file types.