Google Earth is definitely an application that is fun to play around with. Chance is that you will stumble upon some strange sights sooner or later. Plugins make the discovery process easier and it is surprisingly easy to load and find interesting places using those plugins. They basically provide everyone with an ability to load places directly in Google Earth.

The Strange Sights Google Earth Plugin is a collection of interesting sights that users spotted in Google Earth. Sights are divided into categories like "Only from the sky" with sights that can only be seen from the sky or "Virtual Sightseeings" that lead you directly to the Victoria Falls and Mount Everest. They also got a crop circle category for those that are interested in the occult.

Users who would like to give this a try need Google Earth and the Strange Sights plugin. 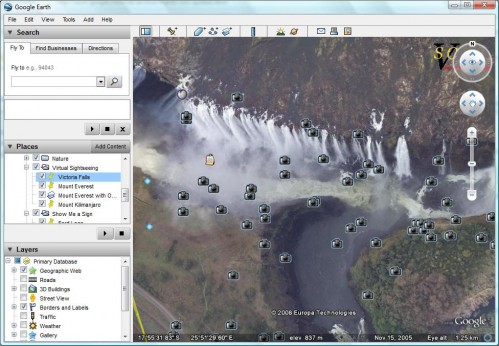 The plugin can be loaded from the File > Open menu and is available in the left bar afterwards. A click on one of the sights loads it directly in Google Earth.

Update: The Strange Sights plugin for Google Earth appears to be no longer available. I tried to find it on the Internet but came up empty handed. What you get when you search on Google for Google Earth Strange Sights Plugin are sites that display top lists of strange sights, but not the plugin itself.Â  It is not clear why it has been pulled from the Internet by its author, only that it is no longer available.

You can however use the websites to locate sights using Google Earth but that is for obvious reasons not as comfortable as using the plugin that displays all the sites at once to you.