Replacing an older hard drive with less space with a new one that offers hundreds of additional Gigabytes can be a confusing task. How do you get the data from the old drive to the new one without rising data loss in the process ? One possibility would be to copy the files manually after installing the operating system on the new drive, but what if you do not want to do that ? What if you want to copy everything including the operating system to the new drive without any additional hassles ?

HD Clone Free might be the solution in this case. The tool can copy contents from a smaller hard drive to a newer one without interfering with an existing operating system, file system or partition layout. It supports IDE, SATA and USB drives with capacities larger than 127 Gigabytes. It does have some limitations though which mainly affect the transfer rate. The maximum transfer rate is limited to 5 Megabytes per second and only USB 1.1. is supported.

Most retail versions of HD Clone support SCSI, Firewire and USB 2.0 but that's probably not necessary for someone who is transferring files from one hard drive to another every two years or so. 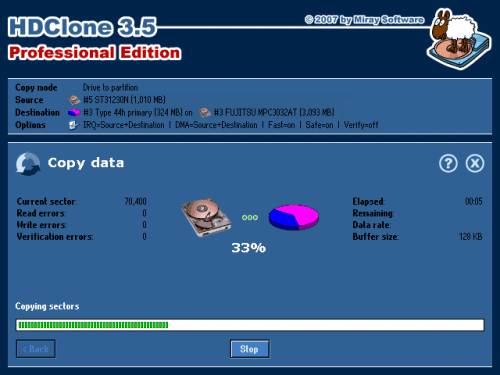 The above image is from the professional version, not the free one. HD Clone creates a bootable floppy disk or CD at first start which is being used to boot the computer and load the HD Clone software. It would not be possible to transfer system files in Windows if Windows is running.

The free version can only copy contents from smaller hard drives to larger ones. Copying partitions is only supported in retail versions of HD Clone. It's still a very handy tool to migrate from one hard drive to another. If you are using large hard drives you better start the process in the morning and it will most likely be finished once you come back later that day.