File recovery from old media disks like CD or DVD might become a huge market in the near future. People using them to store important data, like family pictures, documents or videos, will realize that CDs and DVDs won't last forever and that read errors will happen more frequently. Ever tried to read from a CD that you burned in the last century ? I tried and the CD had lots of read errors although I barely used it in the last ten years or so.

CD Recovery Toolbox is a software that tries to recover data on CDs, DVDs and even HD-DVDs and Blu-Ray discs with no file size limitations which means that it can recover files of a size larger than 4 Gigabytes which is obviously not an issue if you want to recover data from CDs.

The application is compatible to all Microsoft operating systems since - and including - Windows 98 which includes Windows XP and Windows Vista. The easy to use wizard guides the user through the process which is simply a matter of selecting the drive where the CD or DVD has been inserted into, a target directory on the hard disk to store the recovered files and the selection of the files after CD Recovery Toolbox has analyzed the contents of the disk. 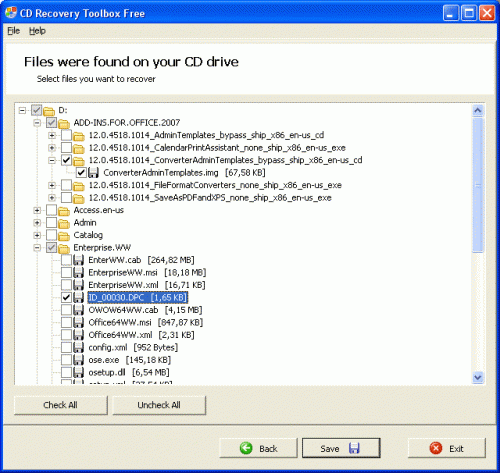 Files and folders can be checked so that they will be recovered in the next step and written to the target directory that was selected in step 2 of the process.

There is no guarantee that all files and folders can be recovered from the disc inserted though. Another application that can be used to recover files from discs is Iso Puzzle which shines if access to several CD or DVD drives is available.

CD Recovery Toolbox on the other hand is the first free tool that I know of that can recover files from Blu-Ray and HD-DVD discs.