Webmasters do not like Microsoft's Internet Explorer because of its inability to comply to web standards and the changes in various versions that make it extremely hard to code a website that looks the same in every version of Internet Explorer.

Testing websites in various versions was not that easy in the past because only one version of Internet Explorer can be installed on an operating system at once. Running virtual machines or using multiple PCs is the only option to test a website in multiple versions of Microsoft's Internet Explorer browser.

A basic tab driven browser interface is provided that can display a website using each version of Internet Explorer on a per tab basis. It comes with a few additional controls like back and forward buttons and access to the Internet Options. 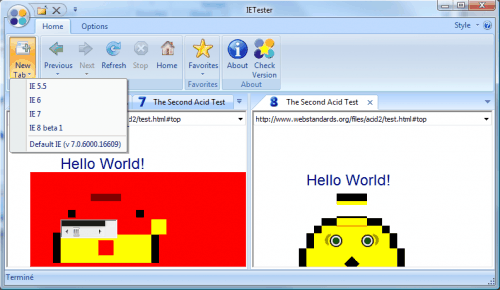 The most interesting feature by far is the ability to display tabs next to each other to be able to compare them on the same screen without having to switch between tabs. The software is an early alpha release with several problems like Java instances not working or Flash not working in IE6. It still works pretty well for most websites that do not make use of advanced scripts.

Update: The IE Tester program has been updated to include recent releases of Microsoft's Internet Explorer. It now supports Internet Explorer 8 and IE9, and on Windows 8 Internet Explorer 10 as well. The reason why it is limited is that IE10 is currently only available Windows 8. This may change in the future when the browser gets released for Windows 7 as well.

The program can be quite useful to test your website or service against different Internet Explorer versions.