Defrag the Registry with Regdefrag

The Windows Registry is not defragmented if you defragment your hard drive. This can be quite a problem for users who regularly install and uninstall applications on their system because uninstallers tend to "forget" to remove entries in the Registry during the uninstallation process.

It's astonishing that even the Registry of my brand new system which has been setup only a week ago was highly fragmented.

Defragmenting the Registry with Regdefrag  reduced the size of the Registry system from 28904 Kilobyte to 27160 Kilobyte which is a reduction of more than 6%.

A smaller Registry file will speed up the time it takes to boot into Windows which is why it is recommended to defragment it regularly. While you won't see improvements while the system is running, it is nevertheless a good practice to do it because of the boot speed improvements.

I remember that the Registry on my old computer had a size of 55 Megabytes, that's twice the size of the current Registry. 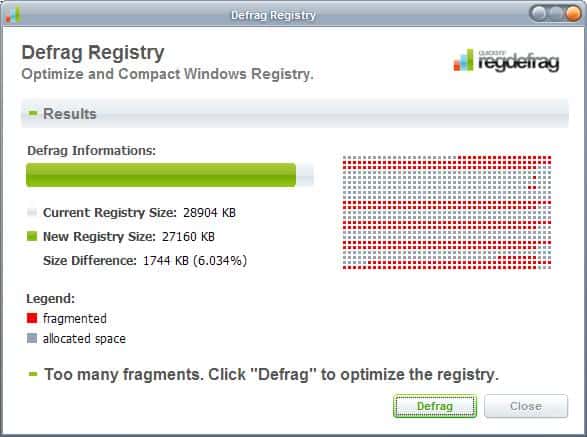 Analysis and defragmentation did only take a matter of seconds on my computer, it probably will take longer on slower computers with a larger Registry but won't be near the time it takes to defragment a hard drive.

The program itself is easy to use. Simply run it and either hit the defrag Registry button right away, or start with a click on get Registry information instead which displays how large the Registry it but not its fragmentation status.

There you may then hit defrag again to start the process or click cancel to exit it.

Update: RegDefrag has not been updated since 2010. The program seems to work fine though in recent versions of Windows