It is sometimes required to run a command or software as another user in Windows. Say you followed the advice that is posted on many sites to work with a regular user account and not as an administrator in Windows then you will sooner or later find out that you sometimes need administrator privileges to run certain commands or applications.

Windows itself provides this feature with the Run As command in the right-click context menu for instance. But what about the command line, run dialog or task manager ? That's where Advanced Run [via Shell City] comes into play. It replaces the windows run as dialog and adds itself to the File > New Task menu in Taskmanager and Windows R shortcut.

The advanced run box provides several advanced features that make it a good addition to your operating system. It does have a history function which means that you can quickly issue a command that you have given in the past without having to type it in manually or finding the executable in Windows Explorer. 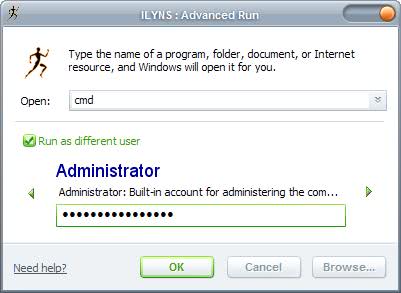 The user can be easily switched with the arrow keys provided, every user account known to the system can be selected this way. Advanced Run is compatible with Windows XP and Windows Vista. A system restart after installation is required before the application can be fully used.