Idle Backup is a convenient easy to use backup solution for Windows 2000, Windows XP or Windows Vista. The main selling point - if you can speak of one for free software - is definitely the ease of use. You pick one or multiple folders that should be backed up when the computer is idle and pick a destination directory on another hard drive or network drive.

A 120 second countdown is initiated and the backup begins automatically when the Automatic On option has been checked and the computer had been idle for that time. Rather interesting is the fact that a backup will be interrupted if a user moves the mouse for instance. The backups are incremental meaning that only new or edited files are copied to the destination.

The next backup will then be started after a certain amount of minutes that can be specified in the options as well. Idle Backup is rather minimalistic which might be appealing to some users, many more will probably miss some basic features and options that would make it a great application. There is no restore function, this is not a huge problem because it's possible to simply copy the files from the backup destination to the original path on the hard drive. 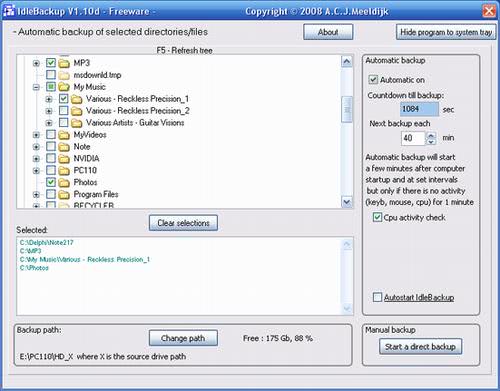 What's really missing are compressed backups which are very essential in my opinion and a way to archive a backup and create a new one. Sequential backups so to speak. I like to keep two or three backups just in case something unforeseen happens. The only possibility that I see would be to change the folder name manually each time you would like to create a new backup instead of overwriting an old one. That's however a bit problematic if you consider that the application is called Idle Backup which means that it normally backups when you are away. It would be possible to rename the folder when your back of course.

The biggest advantage currently is that it is easy to use, plain and simple. The author promised to add zip support in one of the next versions.