Users looking for rescue systems distributed on CDs or DVDs have really no shortage of finding one. The major problem that inexperienced users face is the same that they face when asked to pick a Linux distribution for their system. Too much choice can lead to severe confusion for the user. Despite the fact Avira decided to produce a Rescue System which is probably a good choice if you suspect that the computer does not boot anymore because of a virus, trojan or other malicious code.

The Avira AntiVir Rescue System gives you three options on how to handle the situation. It can try to repair a damaged system, rescue data or scan the system for virus infections. The Rescue System environment can be burned to a CD by double-clicking the downloaded file.

The Rescue System CD does come in handy as well when a computer needs to be checked for viruses before it boots into the operating system. The virus definition files can be updated after booting from the CD. So, this is not your usual Recovery CD that comes with all sorts of tools but one for a very special purpose only. Still nice to have at hand in case the computer gets infected. 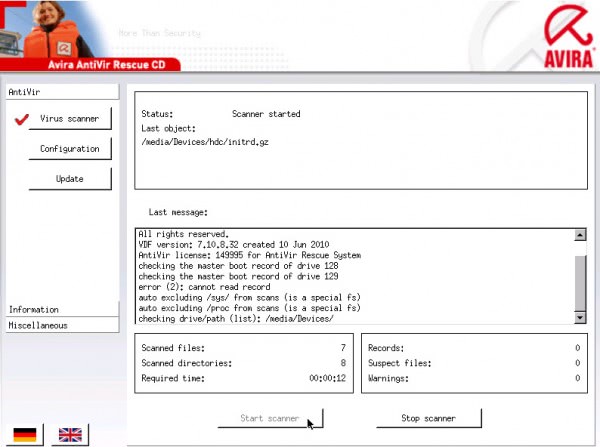 Update: When you boot the rescue system for the first time, you will notice that the language is set to German by default. You can switch the interface language to English easily in the program interface.

AVG is regularly updating the rescue system, and it pays off to check the download page from time to time to see if there is a new version to download. The second thing that you should do after starting your PC from the rescue system disc is to click on the update button to download the latest virus definitions from the AVG server. Keep in mind that you need an Internet connection for that.

Once that is done you can start scanning your system for malicious software. If the program finds any, you get the usual cleaning options.